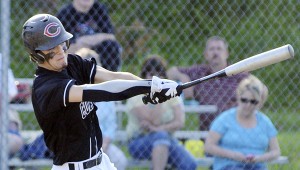 COAL GROVE — Jake Murphy has excelled in football, baseball and track. It comes as no surprise to his coaches.

After leading his team in baseball all season, Murphy stepped in and was second in the pole vault and ran on a relay as he helped the Coal Grove Hornets’ track team win the Ohio Valley Conference title for the third straight year.

“Whenever we needed a clutch play, he was the guy who made it,” said Jay Lucas, Hornets’ assistant football coach and head track coach.

“Jake is a great team player. He does whatever you ask of him and he gives you everything he’s got,” said Lucas.

In baseball, Murphy just completed one of the most phenomenal hitting performances ever for the Hornets’ program.

Murphy was 27 of 40 at the plate for a .675 average and he struck out just four times all season. He stole 24 bases, had a .732 on-base percentage, hit four home runs, six doubles, three triples and a 1.000 slugging percentage.

On the mound, he registered all four of the team’s wins this season.

“We didn’t have as good of a season as last year, but he was always positive,” said Hornets’ baseball coach Dean Mader. “He was a great leader and he had a great work ethic.”

Although Murphy was the Hornets’ best pitcher, he preferred to be behind the plate as the team’s catcher where he has a 1.9-second “pop time,” or the amount of time it takes to catch the ball and throw to second base.

“Catching is where it’s at,” said Murphy. “You get to see everything going on. At the catching position I can line everyone up. On the mound I focus on strikes and I can’t see the field as well.”

Not only does Murphy shine on the field, he has been an outstanding student as well.

With a 4.0-plus grade point average, Murphy earned Academic All-Ohio by the Ohio High School Football Coaches’ Association and already has an academic scholarship to Shawnee State.

“To me, education comes first,” said Murphy. “It’ll be hard (to go to school and not play ball), but if I have to do it, then that’s what I’ll do. The only way I’d play (college ball) is if someone comes to me with an offer and good academics.”

Murphy is looking to major in engineering, but he’s trying to decide which school is best for him.

“As good of a player as Jake is, he’s even better of a person. He’s good on the field and in the classroom,” said Mader.

CINCINNATI (AP) — All the Reds could do with Charlie Morton’s pitches was pound them into the ground, just like... read more