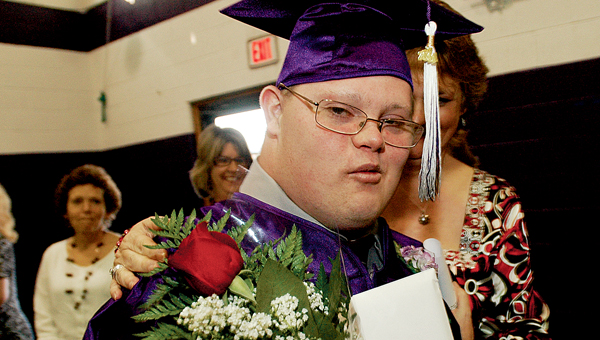 Gregory Alan Chaffin appears calm as can be as he is congratulated after commencement ceremonies Thursday evening during the 2011 Open Door School graduation.

There was gladness for success and a bit of sadness that a special time in life had come to an end.

Justin Ryan Burgess, Gregory Alan Chaffin and Cory Dean Williams graduated from the school and will transition to Tri-State Industries.

The school honored the graduates with a ceremony Thursday evening in its gymnasium.

“It’s emotional,” Chaffin’s mother, Angel Adkins, who attended with Chaffin’s stepfather, said before the ceremony. “I’m excited but I’m not ready for him to go off and graduate. He’s excited but sad. He’ll miss his friends.”

Chaffin’s father, Rich Chaffin of Minford, who came with Chaffin’s stepmother, said he is proud of his son.

Shirley Loevenguth, of Rock Camp, has been Williams’ foster parent since December. She said she’s proud of him.

For Burgess’ family, graduation brought with it excitement and a little concern.

“(I’m) wondering how the future is going to work out because there’s some big changes,” Greg Burgess, Justin Burgess’ father, said. For instance, Justin won’t have a personal aide anymore. He’ll miss the care that the staff and teachers of Open Door School have given Justin.

“You have to admire the teachers because it’s tough and requires a lot of patience,” he said. “They’re remarkable people.”

The school’s staff will miss the graduates, too, Principal Kendra Kelley said.