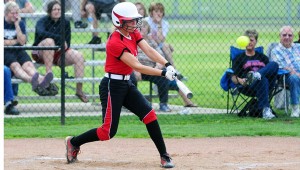 Rock Hill’s Chelsea Harper connects for a two-run home run in the first inning of Friday’s Division III district semifinal game. Dani Crabtree hit a home run in the seventh inning to give the Redwomen a 4-3 win over Peebles. (The Ironton Tribune / Kent Sanborn of Southern Ohio Sports Photos)

CHILLICOTHE — And the ride continues.

The Rock Hill Redwomen continued their tournament journey behind the pitching of Sami Nixon with a 4-0 shutout of the Alexander Lady Spartans on Saturday to win the Division III district championship.

“They did what they had to do. They played great defense, they put down bunts when they had to. I’m proud of them all,” said Rock Hill coach Mary Jane Harper.

It was the first-ever district title for the Redwomen and avenged last year’s 2-1 loss in the district semifinals to Alexander (16-7).

Rock Hill (19-2) will play at 5 p.m. Wednesday against Westfall at Lancaster in the regional semifinals.

Nixon got the win as she held the Lady Spartans without a hit until the seventh inning when Morgan Grinstead doubled with one out. She struck out seven, walked two and allowed only three balls to reach the outfield.

She retired the first eight batters of the game before giving up a walk.

Morgan Schug singled, went to second on a passed ball and Ashley Griffith singled in the run to make it 1-0 in the second inning.

The Redwomen scored two more runs in the third inning.

Brooke Hanshaw singled and Schug doubled to centerfield to drive in the first run. Dani Crabtree singled, stole second and Lindy Simpson had a sacrifice fly to deep leftfield to score the second run and make it 3-0.

In the fourth, Brooke Eastham reached on an error and courtesy runner Haylia Gannon moved up on a bunt by Depriest. She scored on a hit by Chelsea Harper to complete the scoring.

Grinstead doubled with one out in the seventh, but Nixon shook it off and struck out the next batter and then got a pop fly to shortstop to end the game.

MINNEAPOLIS (AP) — The death of Rangers enforcer Derek Boogaard was an accident, due to a toxic mix of alcohol... read more