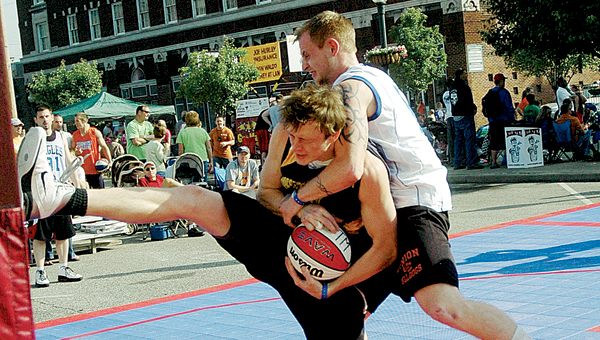 Sue Trammell of Ironton watched her son, Kevin Davis II, play basketball with an intensity that almost matched the heat of the late morning sun Saturday.

Davis was scoring fast and quick for Team Jordan in the 2011 Gus Macker 3-on-3 Basketball Tournament.

“He loves basketball,” Trammell said. “And he had an older brother who played in Gus Macker. I love it and I think the kids absolutely love it.”

This was the third time for Deanna Bentley, 14, of Dawson-Bryant High School, to play in the Macker. This time Deanna was playing for the Loving Basketball team.

“She loves basketball and being around a lot of people,” Deanna’s mother, Paula Bentley said. “I think this is one of the great things in Ironton. It gets the kids out doing sports. Many kids don’t participate in school sports. Some don’t get a chance in school.”

For blocks, spectators were two and three deep watching teams play up and down South Second Street. Music blared out of speakers by the soundstage set up near the slam-dunk court as players there tossed the ball to each other, then took their shots. Vendors hawked ice cream and corn dogs and even politics played in the day.

Kristi Hall sat under a tent collecting signatures on three petitions to put the controversial Senate Bill 5 on the November ballot for a referendum vote. Her petitions were open to voters only from Lawrence, Scioto and Pike counties.

“We have had to turn other people away from Franklin and Jackson,” she said because she didn’t have petitions prepared for those counties.

But she and her husband, Dwayne, were determined to get as many signatures of registered voters as they could. Tucked in her stack of documents were voter registration cards and change of address cards for local residents.

“We are not going to turn any voters away if we can help it,” she said.

Alec Eveland came down from Corning in Perry County to the Macker with his best buddy, Carson Starlin. Their team lost out on their first match, but that wasn’t too much of a disappointment.

They just jumped into the Friends of Ironton Sprayground Park on South Second, opened for the season.

“This is good,” Alec said. “But I wish it would fill up faster so we could play more.”

Carson’s mother Amy Starlin has brought the boys down often to the Macker tournament.

“We usually stay in a hotel in Kentucky,” Starlin said. “We think this is one of the better Gus Macker’s. It is homier and more things for the kids to do. Add this water park and it is a plus for us.”

CHESAPEAKE — The small round metal campaign button pinned on the collar of Angela Midkiff’s shirt said it all —... read more