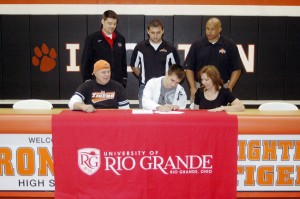 Travis Elliott does something very few player will do. As a result, he’s doing something many of them can only hope to do.

The hustling Ironton Fighting Tigers senior forward’s willingness to play a role instead of trying to pile up points has earned him a chance to play college basketball for the University of Rio Grande.

“He’s going to put on some muscle by the time he’s a junior or senior. He’s a defensive specialist and he does whatever he’s told. He’s a great kid and he’s willing to play a role. You don’t see that today. He’s what every team needs,” said Arrowood.

“He played so hard every time we saw him. He’s that shut down defender every team needs. He’s content with the role he’s asked to play.”

Ironton head coach Mark LaFon believes Elliott will make his way into the lineup at some point in his career.

“His motor never stops running,” said LaFon. “There have been times when I’ve had to tell him to slow down. He doesn’t mind playing defense and rebounding and letting other people score. He can score, but he just does what you ask him to do because he just wants to win.”

Elliott was a first team Associated Press All-District player and special mention All-Ohio in Division III. A three-year letterman and two-year starter, Elliott helped Ironton to the regional finals as a junior and the district title game as a senior.

“Rio Grande kind of fits my style,” said Elliott. “They don’t mind getting on the floor and they’re tough kids.”

Elliott — who averaged 10.3 points and 5.5 rebounds for the Fighting Tigers — said playing defense and against taller players is nothing new for him.

“Defense comes as second nature to me. Defense is the main part of my game. Them wanting me to do that makes it easier for me,” said Elliott.

“I’ve played against taller players all my life. I just have to get strong so I can body them up. The college tempo is so much quicker, but I know I can adjust.”

“His attitude is what will get him to the next level,” said Arrowood.

Travis — who plans to major in education — is the son of Henry “Bo” and Darlene Elliott.