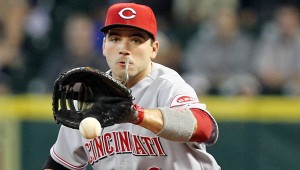 Cincinnati first baseman Joey Votto makes a play at first base. Votto his a solo home run but it wasn’t enough as the Reds lost their third straight at Cleveland on Sunday as the Indians won 12-4. (The Ironton Tribune / MCT Direct)

CLEVELAND — The Cincinnati Reds’ 10-game road trip is off to a woeful start.

Asdrubal Cabrera went 5-for-5 with two homers and five RBIs as the Cleveland Indians completed a three-game sweep with a 12-4 win Sunday over the reeling Reds, who for the moment have lost bragging rights as Ohio’s best team.

Cabrera hit a two-run homer in the first inning off Edinson Volquez (3-2) as the Indians did early damage after winning the series’ first two games with late-inning comebacks.

“The first two games, we had a chance to win,” Baker said. “Not today.”

The Indians scored four runs in the first against the right-hander, who has an 18.00 ERA in the opening inning and trailed in all 10 starts.

“It’s not frustrating, I just have to get better,” Volquez said.

“We hit four, five, six balls well that on other days would have been doubles,” Reds left fielder Chris Heisey said. “That’s baseball. You get days where you nub three or four and they go for hits.

“You never want to start a trip 0-3, but we’re not out of anything. This team will bounce back. I know it.”

Next up is a four-game series in Philadelphia against the team with the NL’s best record. The Phillies swept Cincinnati in the first round of last year’s playoffs.

“We’ve got to get our stuff together and go to Philly,” Baker said. “And it is always tough there.”

The Reds will be happy to leave Cleveland after Michael Brantley, Cabrera and Shin-Soo Choo — the top three hitters in the Indians’ lineup — went a combined 10 for 12 with six runs and nine RBIs.

Joey Votto and Jay Bruce hit solo homers for Cincinnati. Votto gave the Reds a 1-0 lead in the first with a 431-foot shot into the bleachers in left-center, an area rarely reached by left-handers. It was the reigning NL MVP’s sixth homer — first since April 27.

Bruce connected for his 11th in the fourth to get the Reds within 7-2.

Cabrera’s day didn’t start out well. The steady shortstop made a throwing error on Drew Stubbs’ grounder to open the game, but he more than made up for it with his first five-hit, multihomer game. Cabrera also had an error in the sixth, but the Reds couldn’t capitalize as Chad Durbin came on for Carrasco and got three quick outs — two by strikeout.

“We’re not getting the hitting like we were,” Volquez said, pointing out the Cincinnati has totaled 14 runs in its losing streak.

The Indians then blew it open in their half on RBI doubles by Jack Hannahan and Brantley, Cabrera’s run-scoring single and a sacrifice fly by Choo.

Cleveland took a 4-1 lead in the first. Brantley led off with an infield single, and Cabrera hit his eighth homer to make it 2-1. Choo followed with a double and moved up on a groundout before Travis Buck walked. With Orlando Cabrera batting, Buck broke for second, but stopped and got into a brief rundown.

Second baseman Brandon Phillips chased Buck but missed the tag before throwing home. Catcher Ramon Hernandez attempted to get Choo at third, but his throw sailed over Scott Rolen’s head and rolled to the wall, allowing Choo and Buck to score easily.

“Part of that (first inning) was Volquez’s doing,” Baker said. “The error hurt, but he made a bunch of pitches that inning and did not have good command locating his fastball.”

Notes: Reds LHP Aroldis Chapman, on the 15-day disabled list with shoulder inflammation, will make a rehab start on Monday with Triple-A Louisville. Pitching coach Bryan Price said Chapman’s control problems stemmed from him over-rotating his shoulder during his delivery. … Volquez’s ERA in the first inning of 80 career starts is 6.33. … Bruce has three homers in his last four games, going 8 of 14 (.571). … The Reds had won the previous seven series against the Indians. … The “Ohio Showdown” series drew 99,086 — the Indians’ highest weekend attendance since the final week in 2008.