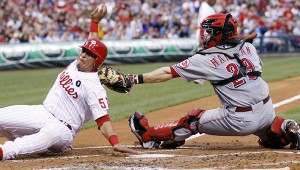 PHILADELPHIA — Maybe all the Philadelphia Phillies needed was to see Chase Utley back in the lineup to perk up their slumping bats.

Jimmy Rollins, Placido Polanco and Raul Ibanez homered to back Cole Hamels, and the Phillies handed the Cincinnati Reds their sixth straight loss, 10-3 on Monday night.

Utley returned after missing the first 46 games with a right knee injury. The five-time All-Star second baseman was 0 for 5, the only starter without a hit.

His teammates did all the damage.

“I don’t know if it was his presence or not, but somebody did something right so we’ll give him credit,” manager Charlie Manuel said.

A struggling offense that had nine runs combined in the previous six games scored nine by the third inning.

That was more than enough for Hamels (6-2). He allowed three runs and five hits in six innings. The lefty is 8-0 with an 1.23 ERA against the Reds, including a five-hit shutout to complete a sweep in last year’s divisional playoff series.

“Him being around gets guys excited and gives us a new energy level,” Hamels said of Utley. “It’s great to see him.”

Jay Bruce hit a three-run homer for the Reds, who haven’t lost this many in a row since dropping eight straight from July 28 to August 4, 2009.

“We just have to get back on track,” Reds manager Dusty Baker said. “That’s two days in a row we went to the bullpen early and we can’t keep doing that.”

All eyes were on Utley long before the first pitch. Television cameras centered on Utley during batting practice and pregame warmups. He even had a rare interview with reporters on the field.

A sellout crowd of 45,841 — the largest in the regular season in the eight-year history of Citizens Bank Park — gave Utley a rousing standing ovation when he came up in the first. Fans stayed on their feet even after the first pitch. He flied out to center.

“I put in a lot of hard work to get to this point,” Utley said. “I’m just happy to be out there.”

Polanco followed Utley’s first at-bat with a two-run drive to left for a 2-0 lead. Polanco remained in the No. 3 hole in the lineup while Utley batted second instead of his usual spot.

The Phillies chased Arroyo with seven runs in the third, six coming with two outs. Ibanez had an RBI single. After Domonic Brown lined to left for the second out, John Mayberry Jr. delivered a two-run single. Hamels followed with an RBI single. Rollins then hit a three-run shot out to right to make it 9-0.

“It’s definitely nice to score together as a group,” Ibanez said. “Hopefully it helps us build momentum. It’s great to see (Utley) out there, to have him back in the lineup. He’s a huge part of our team. We definitely missed him.”

Bruce connected in the fourth, hitting his team-high 12th homer off the right-field foul pole.

Cincinnati’s Todd Frazier struck out in his first career at-bat pinch-hitting in the seventh, but it was a memorable major league debut. On his first swing on the first pitch he saw, the bat flew out of Frazier’s hands and landed in the first row of the stands all the way down the left-field line. It didn’t hit anyone.

Notes: The Reds sent former All-Star right-hander Edinson Volquez to Triple-A before the game. Volquez won 17 games as a rookie in 2008 and started Game 1 of the NLDS vs. Philadelphia last year. …. Phillies RHP Joe Blanton will see renowned orthopedist Dr. James Andrews for a second opinion on his injured elbow. … The sellout was the 162nd straight at Citizens Bank Park, including postseason play. … The seven runs in the third were a season-high in an inning for the Phillies. … Arroyo fell to 1-6 against the Phillies. … Bruce is 11 for 18 with three homers in his last five games.

Losing streak not the end of Reds’ season