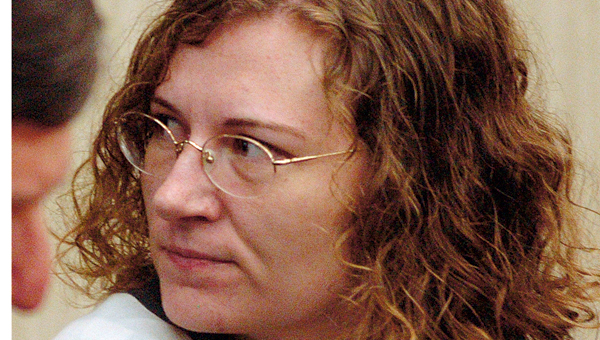 Megan Goff turns and looks back toward her mother before the start of her pretrial Tuesday in Lawrence County Common Pleas Court. THE TRIBUNE/JESSICA ST JAMES

Megan Goff, whose murder conviction four years ago was overturned by the Ohio Supreme Court, will have a jury trial the second time around.

Goff was convicted in May 2007 of the murder of her estranged husband, Bill Goff.

Retired Franklin County Judge Patrick McGrath, sitting by assignment, ruled Tuesday during a hearing in Lawrence County Common Pleas Court that state law allows Goff to change her mind about whether to have her fate decided by a judge or a jury because the state’s highest court has remanded her case for a new trial.

“My feeling is this: a jury trial is one of the most fundamental rights we have,” McGrath said. “We go to square one and we start over. I do believe the waiver can be reasserted. My feeling is the statute would support that she does have the right to a jury trial because of the factual and legal matters that have changed.”

Assistant Lawrence County Prosecutor Bob Anderson had contended that, since Goff opted for a bench trial for her first trial, she could not change her mind about the matter in the new trial.

Further, he contended she was not entitled to change her mind because while her case was remanded for a new trial, no new indictment was filed — two elements essential for the change.

But defense co-counsel Paula Brown had asserted Goff was entitled to the change because the case had been remanded for a new trial and state law allows a defendant to withdraw a waiver of a jury trial before the start of the new trial.

“The statute clearly states it is not just a new indictment but on a retrial, when a new trial is granted it is as though there was no previous trial,” Brown said.

Anderson cited one previous Ohio case to bolster his contention; Brown and her associates cited a statute, prompting McGrath to comment, “There is a paucity of law in this, which kind of surprises me.”

The request for a jury trial was one of several motions heard during Tuesday’s hearing, which began at 10 a.m. and took most of the day.

McGrath withheld ruling on a defense motion for a change of venue. Defense co-counsel Richard Parsons had sought to move the trial out of Lawrence County, citing pretrial publicity.

He offered a DVD with 68 news stories from various local media that focused on Goff’s arrest, first trial and appeals process. He said there were actually 108 stories generated by local media but many of them repeated each other and were not included on the DVD.

But Anderson contended the request for a change of venue was premature.

“The appropriate time is during voir dire (jury selection),” Anderson said. “We don’t know until we get there.” He pointed out it has been four years since Goff’s first trial and it may be easier now to get a fair and impartial jury now because of the time elapsed.

McGrath agreed. Where to have the trial and to switch from trial-by-judge to trial-by-jury were two of several motions heard during Tuesday’s hearing, some of them procedural, such as the prosecution providing the defense with photographs that may be used in court. Others were not.

McGrath said he would issue a ruling later on whether to suppress Goff’s two statements to Sheriff’s Detective Aaron Bollinger after the murder.

“Mrs. Goff, at the time of the shooting, was distraught and emotionally incapable of knowingly and intelligently waiving any rights,” defense co-counsel William Bluth argued. He offered tapes of the statements and the 911 call when Goff summoned deputies after the shooting.

“I think (the tapes) will show just the opposite,” Anderson said.

McGrath ruled the attorneys in the law firm that represented Bill Goff during his divorce could not testify during the second trial as they had the first.

In the first trial, attorney Derick Fisher testified about his conversation with Bill Goff regarding a restraining order and what activity would violate the restraining order. Brown contended neither Fisher nor his partner, Mark McCown, should testify because their testimony violated attorney-client privilege. Anderson argued that attorney client privilege did not apply because a third party overheard the Fisher-Goff conversation and Megan Goff’s previous attorneys, Marty Stillpass and Chris Delawder did not object during the first trial.

He also said the issue was rejected by the court of appeals when Megan Goff’s appeal was heard at that level and was not raised at all at the Supreme Court level.

McGrath will also rule later on a motion to reduce Goff’s bond. In January, Visiting Judge Fred Crow, who heard the first trial, set bond at $2.5 million cash bond, a $250,000 surety bond plus a $100,000 recognizance bond. Crow agreed Goff could be released if she posted 10 percent of the $2.5 million.

If she is released, Goff would be subject to house arrest.

Brown contended bond was too high. She argued Goff has two small children and strong family support and is not a flight risk. She also argued Goff was a battered woman.

“Ms. Goff is not going anywhere,” Brown said. “The Supreme Court reversed her conviction and she should be out on bond.”

But Anderson contended that this is an aggravated murder case and warranted a sizeable bond.

“We know, it’s undisputed, the defendant is capable of going to someone’s house and shooting him 15 times,” Anderson said.

In January 2006, Megan and Bill Goff separated when she filed domestic violence charges against him. Two months later, Goff was arrested at Bill Goff’s home and accused of shooting and killing him.

Goff said she was the victim of domestic abuse. When she stood trial in May 2007, she waived her right to have her case heard by a jury and opted to have visiting Judge Fred Crow determine her fate.

He found her guilty and sentenced her to 30 years in prison for the aggravated murder and three years for the gun specification. While the Fourth District Court of Appeals upheld her conviction, last year the Ohio Supreme Court overturned it, ruling the testimony of expert witness Dr. Phillip Resnick should not have been allowed and remanded the case for a new trial.

The date for the new trial is Aug. 1.

A proposed citywide water meter replacement project will be on the agenda for Thursday’s meeting of the Ironton City Council.... read more