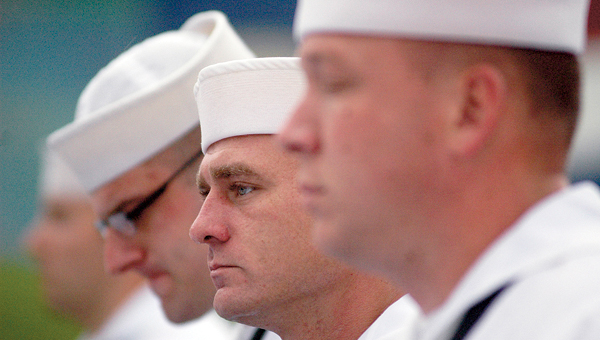 A tradition continued Thursday night when the annual Navy Night service drew a crowd to the Center Street Boat Landing in Ironton.

Master of ceremonies, Judge Charles Cooper, noted that the annual gathering to honor sea-going services serves as a kickoff to the area’s Memorial Day observances.

The keynote speaker, Ohio State Representative Terry Johnson, told those in attendance that, “tonight when the day is done and you turn out your lights, you will be safe from enemies and you will be safe because soldiers are far from home, holding the line.”

He paid particular tribute to those who served in World War II, noting that those men and women not only went into battle when their country called them, but then came home and turned their attention to making their country the greatest ever.

“They became teachers and ministers and doctors and businessmen and lawyers. They not only saved the world in World War II but they came home and showed us what they learned. They brought us to this day,” Johnson said.

And in a nod to the present day soldier, Johnson said, “God bless all of those who are out there now serving.” 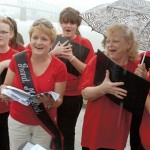 Members of the Plymouth Heights Nazarene Choir brave the rain as they perform the tunes “In God We Trust,” “Salute to Soldiers,” and “Let Freedom Ring” during Navy Night Thursday in downtown Ironton.

Much of Thursday’s service was conducted in the rain, but Johnson joked that it was “a army weather” and said those who stayed in spite of the weather they were “blessed to be sitting here today in this rain. It’s part of living in paradise.”

In his invocation, the Rev. Tim Throckmorton thanked God for those who have served their country throughout the years.

“We have been blessed by brave men and men of the United States Navy who have protected our borders and defended our liberty.”

At the end of the ceremony, Boy Scout Troop 106 cast flowers on the waters of the Ohio River and members of the Ohio Department of Natural Resources laid a wreath in the water. The staff aboard the Marathon Ashland Petroleum boat “Kentucky” sprayed a plume of water in a show of patriotic support.

County to get state money for road repair