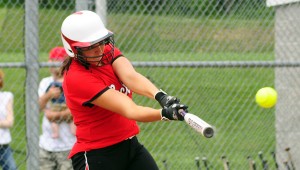 LANCASTER — It was quite a ride.

The Rock Hill Redwomen were on a tournament trail that saw them get within one win of the state tournament.

But a 6-1 loss in the Division III regional finals to the Baltimore Liberty Union Lady Lions on Saturday ended their run just shy of that goal.

“I’m so proud of our girls. They had a great season, a great run in the tournament and a lot to look forward to next year,” said Rock Hill coach Mary Jane Harper.

The loss closes out the second 20-win season in school history for the Redwomen at 20-3. It also mark the first time a Rock Hill team has advance to the regional finals in any sport.

Liberty Union (26-2) will now play at 10 a.m. on Thursday in the state semifinals at Firestone Stadium in Akron against West Liberty-Salem who beat Milford Center Fairbanks 5-1.

Both teams were looking for the first regional title in school history.

The game was scoreless until Megan Van Almsick doubled with the bases loaded to give Liberty Union a 3-0 lead in the third inning.

Rock Hill scored its only run in the bottom of the fifth inning when Crabtree blasted a solo home run to left field.

The Lady Lions didn’t get their final three runs until the seventh inning when Leanna Bachman belted a three-run homer.

Klopfer is 26-1 and set school records for wins in a single season and for a career (68).

Rock Hill freshman pitcher Sami Nixon took the loss. She gave up eight hits, walked three and did not get a strikeout.

Besides hearing the first reading of an ordinance that would award an approximately $1.1 million bid to Southern Ohio Trenching... read more