Cordero gets career save 300 as Reds rally to beat Brewers 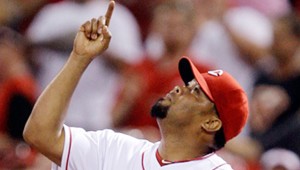 Cincinnati reliever Francisco Cordero points toward the heavens to thank God for his abilities as he celebrates his 300th career save on Wednesday as the Reds beat the Milwaukee Brewers 4-3. (The Ironton Tribune / Courtesy of The Cincinnati Reds)

CINCINNATI (AP) — Francisco Cordero raised his arms and threw back his head, reveling in the big number that had eluded him for a week.

Finally, he’d gotten his 300th save. And it came on a night when it appeared he’d be nothing more than a spectator.

Jay Bruce and Joey Votto hit two-run homers during Cincinnati’s late comeback, and Cordero took advantage of the unexpected opportunity, securing a 4-3 win over the Milwaukee Brewers that prompted his on-the-mound celebration.

Cordero became the 22nd pitcher to get 300 saves.

“That’s a big number,” said Cordero, who also pitched for Detroit, Texas and Milwaukee. “I don’t know what to say. I’m just so excited. I’m really happy. I’m just glad I could get it out of the way. Now I can focus on getting saves and helping us get to the playoffs.”

The struggling Reds won for only the fourth time in their last 15 games, relying on their two best hitters — and their reliable closer — to pull it out.

Bruce hit his 17th homer in the seventh inning, ending Shaun Marcum’s shutout bid by connecting on a poorly placed changeup. Votto added a two-run shot in the eighth off Kameron Loe (2-5), who hit Brandon Phillips with two outs to bring up the NL’s Most Valuable Player.

Nick Masset (1-3) pitched out of a threat in the eighth, giving the Reds a chance for their 15th come-from-behind win.

The crowd of 22,213 stood and cheered as Cordero ran from the bullpen to pitch the ninth, knowing he was one away from 300. Cordero got his 299th save on May 24 and had a chance for another last Wednesday in Philadelphia. He blew a lead in the 10th inning, and the Reds wound up losing in 19 innings.

No wobbles this time. Cordero retired all three batters, getting Craig Counsell on a called third strike to end it.

“It hasn’t been on my mind,” Cordero said. “It’s other people saying, ’When’s it going to be? When are you getting it done?’ I kept telling them, ’I’m right there. It won’t be long. It’ll come any time.”’

Cordero tied Bruce Sutter with 300 saves and improved to 10 for 12 this season. He has 123 saves in four seasons with the Reds, leaving him third in club history behind Danny Graves (182) and John Franco (148).

For the Brewers, it was just another stunning loss in the ballpark where they’ve had so many. A win would have boosted them six games over .500 for the first time in two years. Instead, they wasted another solid start by Marcum and wound up losing for the 13th time in their last 15 games at Great American Ball Park.

In several ways, it reminded Milwaukee of opening day.

Just like the opener, Rickie Weeks led it off with a homer, this time off Mike Leake. It was his third leadoff homer against the Reds this season.

And, just like opening day, the lead got away in the Reds’ final at-bat.

The Reds managed only two hits in the first six innings off Marcum. Bruce homered in the seventh, extending his May tear into a new month. The outfielder has 13 homers and 35 RBIs in May and now June.

Loe retired the first two Reds in the eighth, then grazed Phillips’ arm with a fastball that he quickly regretted.

“I’m (mad) at myself for hitting Phillips,” Loe said. “I can get a ground ball out of him every time, I feel. Against Votto, I got one up. I pretty much threw the sinker too hard and it stayed up.”

Votto had only one homer in May, but hit the hanging slider high off the batter’s eye in center for a 4-3 lead that gave Cordero his shot at No. 300.

The Brewers wasted another fast start by Weeks, who has hit four of his 10 homers off the Reds this season. Milwaukee led 3-0 before Bruce and Votto led the comeback.

NOTES: Both teams gave their slumping third basemen a day out of the starting lineup. Milwaukee’s Casey McGehee is in a 3-for-23 slump. Cincinnati’s Scott Rolen is 2 for 16. Rolen got into the game in the eighth inning as part of a double switch. … It was Weeks’ 24th career leadoff homer, trailing Paul Molitor’s 33 on the Brewers list. … The Reds have given up four leadoff homers this season. … An indication of how much Bruce has carried the Reds’ offense lately: He has seven of their last eight homers and nine of their last 11. … Reds leadoff hitter Drew Stubbs struck out three times for the second straight game. He leads the NL with 73 strikeouts.