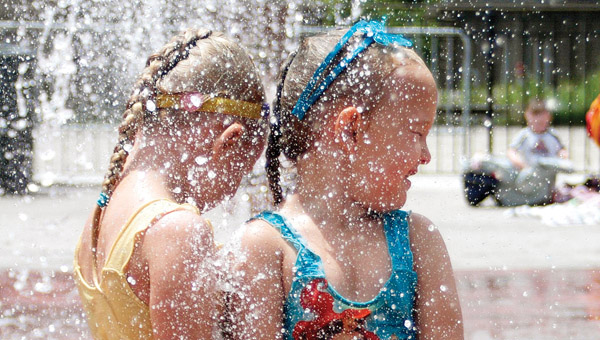 Temperatures may be heating up but many area children found a place to cool off in Ironton Thursday.

Ironton’s Splash Park has been a hot spot for those wanting to beat the heat. The park was closed Wednesday because of a broken water jet head but was reopened the next day.

“I think it’s great,” Cordle said of the water playground. “It’s a great alternative to swimming pools and it doesn’t cost anything. The kids love it… Swimming pools are so expensive now days. This is great especially if you only want to be here for a little while.”

Cordle said she plans to come to the park two or three times a week.

Deborah White of Ironton brought her grandson and granddaughter.

“I love it,” White said. “I noticed it the other week. The kids were complaining that it was hot and I said, ‘Come on, let’s go.’ The kids need some place to go that’s cool. You can’t get in the Ohio River.”

Jessica Bundy of Ironton was at the park for the first time Thursday.

Bundy’s daughter, 6-year-old Mikeala Hanshaw, enjoyed her time there, too.

“It’s very fun,” she said. “There was water shooting out of the ground. I want to come here more.”

“It’s my first time coming and I’m having fun,” Aliceson said. “The other kids are having fun too.”

The park was a gift from civic organization the Friends of Ironton, who recently conveyed the property to the city. Ironton Recreation Director Brett Thomas said the city is in the process of establishing rules and regulations for the sprayground. The Ironton City Council must approve the rules.

The group is also donating park benches that have been ordered and should be in place sometime this summer. Eventually, Friends of Ironton will donate a shelter as well, though that might not be until next year, Thomas said.

Thomas said the response to the park has been overwhelming.

“It’s actually going really well,” he said. “Everyone seems to be excited.”