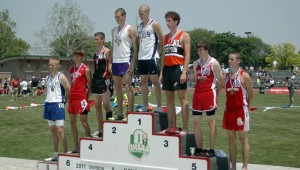 Ironton Fighting Tigers' senior Gary Monroe stands at the No. 3 spot on the podium after his third place finish in the 1600-meter race at the OHSAA state track meet Saturday. (The Ironton Tribune / Jimmy Walker)

Last year Monroe stood on the lowest spot of the podium after his eighth place finish in the 1600-meter run. He wasn’t about to stand on a lower spot this time as he placed third in the event on Saturday at the Ohio High School Athletic Association Division II state track and field meet.

Monroe — who was not expected to podium based on the entry sheets — stayed close to the pre-race favorites Steve Weaver of Napoleon and Adrian Ross of Unioto. The strategy worked as Weaver won the race with a 4:16.48 time and Ross was second at 4:18.36.

Monroe took third place with his personal-best clocking of 4:19.38 while Sam Prakel of Versailles was fourth at 4:19.76.

“The main thing was hanging close to them early. They usually lose me at the 800 mark,” said Monroe.

“I didn’t expect to be that close. I was sitting in fourth and (Prakel) passed me at one point and I thought this was going to be the same thing as last year. But I made a move and ran with all I could. I’ll take third, especially after those guys (Weaver and Ross).”

With about 2:12 into the race, Monroe decided to start his push and stay with the leaders and pull away from the pack.

“I was going hang onto (Prakel) as long as I could and then make my move to get past him. I didn’t know if I could. It was hot,” said Monroe who battled the 92-degree temperatures along with the other runners.

“Gary ran a great race. He ran his best in his last race. I couldn’t be any more proud of him,” said Ironton boys’ coach Greg Cronacher.

Monroe’s best time was a 4:21.71 last year in the regional finals. His time on Saturday was also a new school record.

“Gary’s very dedicated and a very hard worker. He earned everything he got during his career. I’m glad to see him finish like he did. Today’s race was a microcosm of his career,” said Ironton running coach Tim Thomas.