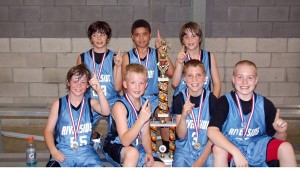 The Riverside Flyers are going to play a few more games.

The Flyers won the AAU Division II state championship in Columbus to earn a berth in the nationals July 16-21 in Cincinnati.

The team has played in eight tournaments and they have come away with seven championship trophies.

Their only loss came in their first tournament — the Cincinnti Bearcat Classic. Riverside led by three points with one minute to play but lost by three at the buzzer.

The players listened to their coach and rallied to win by seven.

Riverside — fourth grade-aged team— finished the regular season 35-2 with one loss coming in the Bearcat tournament to fifth grade team.

The Associated Press PARIS — Rafael Nadal is still better on clay than the most successful Grand Slam champion of... read more