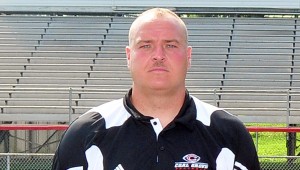 Already an assistant football coach and the boys’ head track coach, Lucas has added the title of boys’ head basketball coach to his duties at Coal Grove High School.

The board of education hired Lucas last Thursday to replace Randy Ward who resigned after four seasons.

Lucas said he doesn’t see any problems with coaching three sports and conducting the weightlifting program.

The son of the Hornets’ Hall of Fame head football coach Dave Lucas, Jay Lucas was a three-sport standout for the Hornets in the football, basketball and track.

“I thought it would be a good challenge and I thought I could get the kids out and play. It seemed like the right thing to do,” said Lucas.

“We have a good group of boys. They came to me and asked if I would do it. We’ve had some open gyms and we’ve had some good turnouts.”

The Hornets won just two games last season and they were winless in the OVC. Lucas knows it will take time to turn the program’s fortunes around.

“My first goal is to increase the participation with the kids. I think if we get all our athletes out and get them working hard like they do in football and other sports, we can build on the successes we’ve had,” said Lucas.

“I truly believe you can have success here. We need to get the kids in the system and build the program up from the bottom. The board and administration is behind me. They feel I can have a good program and I hope I can deliver.”

Despite loss, Reds’ rotation almost back to full strength

The Associated Press CINCINNATI — The Reds are slowly getting their rotation back in shape. Still, they proved in a... read more