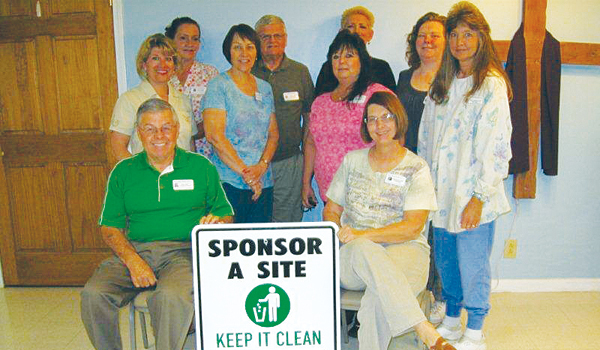 Staff from River’s Bend Health Care has joined the Lawrence-Scioto Solid Waste District’s Sponsor a Site program. The staff has pledged to keep the area around the center litter free.

BURLINGTON — River’s Bend Health Care in Burlington is the latest to join the Sponsor a Site program of the Lawrence-Scioto Solid Waste District.

“We were invited to participate in the Lawrence County Cleanup Day and decided to adopt the whole neighborhood,” Julie Terry, marketing and admissions director at the health care center, said. “We had a lot of interest and enthusiasm from the staff to make sure the area looks great all through the year.”

The targeted area for River’s Bend will be the area around the center between Jefferson and Lincoln avenues and Second Street.

“It is kind of unique that our facility is in a neighborhood,” Terry said. “This is volunteer and the managers are in full support. On lunch or after work when we notice things, we will take it upon ourselves to make sure it looks nice.”

The center recently had some trees on one side of the property removed that were blocking the view from U.S. 52.

“That is part of our cleanup effort,” Terry said. “We now have a nice open field and are visible from 52. That makes the facility look tidy. We are still surrounded by trees and a woody area.”

River’s Bend was the 24th sponsor to join the Lawrence County segment of the program that also had 16 sponsors in Scioto County.

“They are all over the county,” Dan Palmer of the solid waste district, said “We are more excited that more people are coming on board. This Lawrence County-wide Cleanup raises a lot of awareness and is getting people involved and getting the various groups involved. People are taking pride.”

Any group or individuals who would like to sponsor a site can contact Palmer. The solid waste district will provide bags and gloves and will pick up filled bags when called.

CINCINNATI — The U.S. Court of Appeals, Sixth Circuit, has ruled a Rock Hill schoolteacher has a right to have... read more