Fickell wasn’t told of any violations 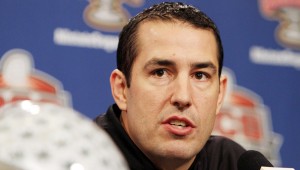 Luke Fickell addresses the media during a press conference. Fickell is now in the spotlight as he takes over as the Ohio State Buckeyes’ head football coach after the resignation of Jim Tressel in the midst of an NCAA investigation. (The Ironton Tribune / MCT Direct)

COLUMBUS — In his first solo moment in the spotlight as Ohio State’s interim coach, Luke Fickell made a point to graciously mention his deposed predecessor.

He thanked Jim Tressel, forced to resign on May 30 as the heat escalated from an ongoing NCAA investigation, “for the opportunities he’s given me, for the friendship and for making me a better coach, husband and father.”

Still, Fickell only referred to his ex-boss twice in almost 35 minutes before reporters on Monday. And he did make one major break when he said he didn’t know anything about any NCAA rules violations under Tressel’s watch.

“I wasn’t going to say that I had blinders on, but (I was) very focused on the task at hand,” Fickell said. “I was not informed of any information until it became public knowledge.”

Fickell spoke at an introductory news conference, during which he promised Buckeyes fans a team that would be about “respect, toughness and being men of action.”

The 37-year-old Fickell is a former Ohio State player who has been on the staff for the last 10 years, coaching linebackers and, most recently, serving as co-defensive coordinator.

He said the ongoing problems at his alma mater have affected him.

“I’m not saying I’m not disappointed, I’m not upset,” he said. “But again, we’re moving forward.”

Fickell was selected to fill in when Tressel was suspended for the first five games of the 2011 season for knowing players were accepting cash and discounted tattoos in exchange for memorabilia from a tattoo-parlor owner and failing to notify his superiors.

After weeks of revelations and rumors, Tressel resigned under pressure two weeks ago amid an ongoing NCAA investigation of his ultrasuccessful program. In the hours that followed, Tressel spoke briefly with Fickell and gave him some simple advice: Be yourself.

“I want to share with you why for me it was pretty easy to sit down with him and ask him to take on this leadership role,” Smith said. “You know his great success in teaching and recruiting and that’s represented in the number of student-athletes who came here and became Big Ten players and All Americans and ultimately went onto the NFL at the professional level. It’s recognized in the great years of service (and) the respect that the high school coaches in the state and the coaches on our staff have for him. We’re very, very pleased he’s going to step into this role.”

Smith also announced that Fickell’s two-year contract would be modified to pay him $775,000 a year in addition to some bonuses. Tressel was paid an estimated $3.5 million per season. He was 106-22 in his 10 seasons, leading the Buckeyes to the national championship in 2002.

Fickell said he was contacted by Terrelle Pryor, one of the five players who was suspended for five games in the memorabilia-for-cash scheme, while the star quarterback was making up his mind whether to return to Ohio State. The new coach said he never called Pryor back.

“The situation just didn’t work out that we had the chance to sit down and talk,” Fickell said.

Pryor announced last week he would forgo his senior season and refuse to answer any more questions from NCAA investigators. The NCAA infractions committee will meet with Ohio State officials on Aug. 12.

As a guy with one year to prove he deserves to be the Buckeyes head coach, it’s difficult to believe that he wouldn’t try to keep a three-year starter with a 31-4 career record as the first-team QB. But not making the effort to bring Pryor back will undoubtedly play well to Ohio State fans who have grown tired of the series of soap operas Pryor has starred in through his three years in Columbus.

“We’re going to continue to educate, educate, educate our guys,” Fickell said of his plans for heading off further problems in the once-proud program. “We understand that we are going to deal with compliance. We are going to go through this situation thoroughly and methodically so we can figure out what is best and the best ways we can handle this stuff for the future because, again, we have to plan for the future.”

Pryor signed with agent Drew Rosenhaus earlier Monday and took the first steps toward making himself available for an NFL supplemental draft this summer. Also, the lawyer who first sent emails to Tressel to tell him of the violations is being investigated by the Ohio Supreme Court for misconduct for revealing to the coach what he learned from a potential client.

Possible penalties that could be imposed by the NCAA’s committee on infractions include vacating seasons, a bowl ban and restrictions on recruiting.

Born and raised not far from Ohio Stadium, Fickell comes in with an appreciation for one tradition which remains near and dear to Ohio State fans: The annual season-ending rivalry game with Michigan.