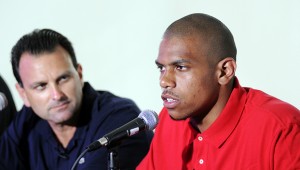 Speaking for the first time since his Ohio State career ended in scandal, Terrelle Pryor, right, appears with agent Drew Rosenhaus and apologizes to the Buckeyes, his former teammates and now-departed coach Jim Tressel, during a news conference on Tuesday in Miami, Fla. (The Ironton Tribune / MCT Direct Photos)

Speaking out, albeit briefly, for the first time since his college career at Ohio State ended embroiled in scandal, Pryor appeared with agent Drew Rosenhaus and gave a brief statement. He apologized to the Buckeyes, to his former teammates and to now-departed coach Jim Tressel for his role in the mess that may take down one of America’s proudest programs.

“I say sorry to all the Buckeye nation and all the Buckeye fans across the country,” Pryor said. “I never meant to hurt anybody directly or indirectly with my conduct off the field and I am truly sorry.”

Pryor had already been suspended by Ohio State and the NCAA for the first five games of what would have been his senior season this fall for accepting improper benefits, such as cash and discounted tattoos. The scandal led to Tressel’s forced resignation. Tressel acknowledged knowing his players were taking improper benefits but covered it up for more than nine months before Ohio State officials discovered his knowledge.

Pryor is Ohio State’s all-time leading rusher among quarterbacks, with 2,164 yards. He also threw 57 touchdown passes, tying a school record, and is now aiming to be selected in the NFL’s supplemental draft this summer.

“In terms of coach Jim Tressel, a special shoutout,” Pryor said. “I’m sorry for what all went down and I apologize with all my heart. I love you just like a father. You taught me a lot and I apologize for putting you in a situation and taking you out of a job and place that you loved to be. I regret the fact that you’re not there any more and I regret the fact that I’m not there any more.”

The NCAA continues investigating all aspects of Ohio State’s athletic program, particularly the football team, including whether athletes received cars, money or other extra benefits that would be against collegiate rules. Last week, when Pryor revealed that he was leaving school, ESPN reported that a former friend of his, speaking to the network under the condition of anonymity, claimed he the quarterback made up to $40,000 annually signing autographs.

Pryor may still be asked to cooperate with that NCAA investigation. However, his attorney Larry James said last week the quarterback feels no obligation to speak with NCAA investigators now that he is no longer enrolled at Ohio State.

“He is very sad about what has happened to his college career and Ohio State,” Rosenhaus said. “I can tell you that he is extremely, he is responsible for the mistakes that he has made. He has owned up to that. There are no excuses here, guys. No excuses at all. But the past is now the past for him and we have to move ahead. There is no point in him looking back.”

Rosenhaus, who famously once kept repeating “Next question” at a news conference he hosted about client Terrell Owens — the agent even got the pronunciations of their first names mixed up at one point — took the tact of “No questions” on Tuesday.

“I think I’ve said it all,” Rosenhaus said after he spoke for about six minutes in which, among other things, insisted he believes Pryor will be a first-round pick in this summer’s supplemental draft. “So I’d like to thank everybody for coming. Guys, we’re going to shut it down right now and I appreciate your time. Thank you.”

Reporters shouted questions and followed Rosenhaus, Pryor, other members of the entourage and some security up a hotel corridor, to no avail.

“Terrelle Pryor will be a great — not a good quarterback — a great quarterback in the National Football League,” Rosenhaus said. “He is going to be a star. This experience that he has gone through will galvanize him and make him a better person, a stronger person.”

Rosenhaus said he spoke with Tressel before signing Pryor as a client, and that the former Buckeyes coach will remain involved with Pryor’s future. “He’s going to champion this young man,” Rosenhaus said.

The agent, who represents many NFL stars, also compared Pryor to Cam Newton, the No. 1 pick in this year’s draft. Some prognosticators have suggested Pryor may not be worth more than a fourth- or fifth-round pick in the supplemental draft, in which teams would have to forfeit a parallel round choice in the 2012 draft by making a selection. Others have speculated that Pryor may be better served changing positions.

“This league needs quarterbacks. Are you kidding me? Middle round for this guy?” Rosenhaus said.

As Rosenhaus was speaking during the event, Pryor mainly stared straight ahead, arms folded and resting on the table. He worked out Tuesday morning with a group including receiver Chad Ochocinco, who offered praise on Twitter.

“With the right coaching after what I saw today with my own eyes he can be a great QB,” Ochocinco wrote.

”I’m working hard every single day on the field and off the field to be a better quarterback,” Pryor said. “Also, one of my goals is to be the best person I can possibly be off the field.”

When Pryor finished, Rosenhaus looked at him and said, “Terrific. Thank you, Terrelle.”