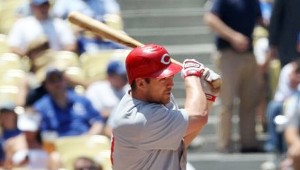 LOS ANGELES — Scott Rolen has become an expert on how to play with pain and discomfort. He’s been on the disabled list enough during his 16-year career to have a greater appreciation for the time he does spend on the field.

Rolen got three hits and drove in three runs, leading the Cincinnati Reds over Los Angeles 7-2 on Wednesday for their first three-game sweep of the Dodgers since 2004.

The six-time All-Star third baseman, who has been on the DL six times since driving in a career-high 124 runs in 2004 with St. Louis, had a pair of RBI doubles and a run-scoring single off Chad Billingsley.

“He hit the ball hard today in a couple of big spots to get us on the board,” manager Dusty Baker said. “He wasn’t moving too good, but he said he wanted to play. That’s what pros do. They play even though they’re not feeling 100 percent. And we certainly needed him today.”

Rolen sat out Friday night’s series opener after finishing a game at San Francisco in which he fouled a pitch off his left foot in the second inning. He returned to the lineup Saturday night, contributing an RBI double to a 4-2 victory.

“I can play on it, but it might not be pretty sometimes,” said Rolen, who is 15 hits shy of 2,000 and five doubles away from 500. “I might be hobbling around on it a little bit, but I’m not hurt. That’s an ankle that I sprained about nine times in high school playing basketball, so it doesn’t do too well with swelling. Anytime anything hits it, it goes through the Achilles. I mean, I’m not going to cry about that, but it just loses some mobility and flexibility. But I’m fine.”

The Reds won on Baker’s 62nd birthday. His teams are 5-11 on June 15 during his 18 seasons as a manager. It was a far cry from the last two times he was in uniform on his birthday. Last year, Reds lost 12-0 to the Dodgers at Cincinnati — and two years ago Boston routed them 9-0 at Great American Ball Park.

“It was a real nice birthday present,” Baker said. “It’s the first time I can remember winning a game on my birthday in about 10 years. That’s the one thing I wanted today. It’s rare to come in here and sweep the Dodgers. We needed it. That was a perfect ending on this west coast trip, which has really been a nemesis to most teams in the east.”

Ryan Hanigan and Fred Lewis each drove in two runs, helping put Los Angeles a season-high eight games under .500. This was the first time the Dodgers were swept in a three-game series at home since June 12-13, 2010, by the Angels.

“We’re going to have to play solid baseball for a long period of time to get back in this thing,” rookie manager Don Mattingly said.

Travis Wood (5-4) allowed one run, five hits and five walks over six innings. He did not retire more than two batters in a row at any point.

Billingsley (5-6) labored through four innings with 88 pitches. He allowed seven runs, nine hits and four walks. Last Friday at Colorado, he was tagged for a career-worst 13 hits over 4 2-3 innings.

Cincinnati took a 2-1 lead in the second with RBI doubles by Rolen and Lewis. The Reds made it 6-1 in the third on Rolen’s run-scoring single, a bases-loaded walk to Lewis and a two-run single by Hanigan.

Handed a five-run cushion, Wood promptly plunked the slumping Andre Ethier with his first pitch in the bottom of the third, the first time Ethier was hit this season. But left fielder Jonny Gomes raced toward the foul line and made a diving backhanded grab across the line to rob James Loney of a two-run double.

“It’s no secret about the visibility in this place in day games. Dusty told us about it, going back to when he played here,” Gomes said. “The seats are the same color as the ball, if you think about it, so you have to take some chances here. I definitely don’t play Loney on the line by any means ever. But Woodie had his cutter going and Loney kept fouling balls off to my side. So every pitch he threw, I took another step, and another step, and another step.”

Rolen made it 7-1 in the fourth with his second RBI double, giving him his first three-RBI game since April 6 against Houston.

“I’ve always enjoyed playing out here, but you always run into good teams,” Rolen said. “We split (a four-game series) in San Francisco, which you take. Maybe we could have gotten one more, but they’re a good team, too. And we obviously played well here. So a 5-2 trip, I think we would have taken that before we left Cincinnati.”

The Dodgers had Wood in trouble in the first after a two-out double by Ethier, an intentional walk to Matt Kemp and another walk to Juan Uribe. The left-hander then walked the .163-hitting Marcus Thames to force in a run, but minimized the damage by retiring Loney on a line drive to right field. Loney is batting just .203 with runners in scoring position.

“It was a rough first, but I was able to settle down. It was a battle all game, though,” Wood said. “Fortunately, I was able to keep them off-balance enough and keep them from scoring. We had a couple of clutch double plays that helped out a lot.”

NOTES: Ethier is hitting .250 with two homers, 15 RBIs and 29 strikeouts in 37 games since getting the final hit of his 30-game hitting streak on May 6. In his first 32 games, he hit .379 with three homers and 17 RBIs. Ethier has gone six games (25 at-bats) since his last RBI and 18 games (66 at-bats) since his last home run. … During his 19-year playing career with the Braves, Dodgers, Giants and Athletics, Baker was in the starting lineup on his birthday 10 times. He was 13 for 35 with two home runs and nine RBIs in those games, and his teams were 6-4. … The seven runs against Billingsley were one shy of the total he allowed over 42 innings in his six previous home starts this season. He came in 3-0 with a 2.25 ERA against the Reds at Dodger Stadium. … Rolen is 8 for 15 lifetime against Billingsley with five RBIs.

A man who eluded the long arm of the law for two years and repeatedly violated his probation will spend... read more