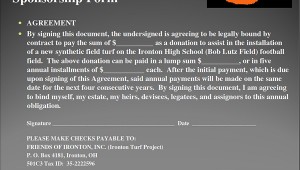 A couple of years ago, Bob Lutz became the all-time victory leader among Ohio High School football coaches. After that 32-12 win over Nelsonville-York, a post-game ceremony announced the naming of the Tanks Memorial Stadium field after coach Lutz.

With the recent work of Lutz and a local group of boosters, it may really become Lutz’s field.

The group of athletic boosters came to Lutz with the idea of raising money to put artificial turf on the field. With today’s improvements in field turf, Lutz agreed to help with project.

While the group has been inching toward its goal of $650,000, there is still more money needed for the turf project that is separate from the Tanks Memorial Stadium Fund set aside to help refurbish the historical stadium.

All the funding has come from private donations by former players, graduates, fans and businessmen and women. The group is getting close enough that there is a possibility that the turf could be installed before the season begins on Aug. 26 at home against Wheelersburg.

Project information and pledge forms are available on the Ironton High School website tigertown.com. Although there are different levels of donations listed, any amount is more than welcomed.

A lot of former players and graduates who have benefited from their education and athletic careers at Ironton have already made pledges.

The turf will be beneficial to more than just the football team.

Without the worries of wearing down the grass or chewing up the sod, the grade school program will be able to play their games on the turf.

Not only that, the band will be able to hold competitions without waiting until the end of the season for fear of bad weather that would ruin the playing surface or just having so many bands marching back and forth in the middle of the field.

Even the baseball team can take ground balls in the spring when the weather is bad at their field. And don’t forget graduation is held on the field.

Lutz didn’t like turf during its infancy. Not only was it more expensive — estimates were around $1 million — the early turf fields were just asphalt covered with a pad and a carpet. Now, the surface is comprised of silica sand and cryogenic rubber and the carpet has been replaced by artificial blades of grass.

The turf drains readily, taking as much as 24 inches of rain in a single day without any problem. The field needs a brushing roller but that is included in the installation.

Not only are there fewer injuries on turf than grass, there are financial advantages as well. The field does not have to be painted before each game, there is no cutting the grass two or three times a week, and the major expense of watering the field will erase as much as $5,000 a month.

Ironton has always been a proud community. The people always seem to work together for not only the betterment of the town but for anything that benefits the youth now and in the future.

Even those who move away still follow Ironton football and want the best for their family and friends.

Let’s prove that there’s nothing artificial about Ironton’s love of football.