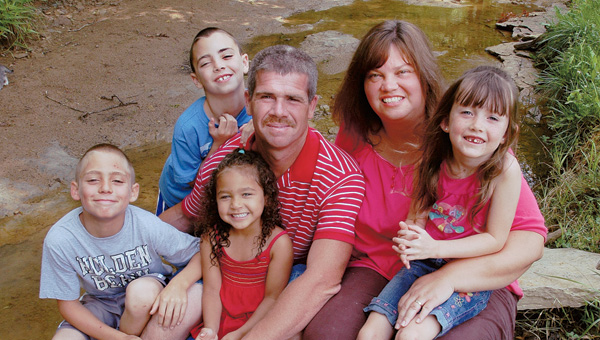 The Mike and Lisa Patterson family take a moment to relax where the kids like to play — in the creek behind their house.

KITTS HILL — It’s a cool Friday morning and Mike and Lisa Patterson watch as their four kids skitter across the front porch of their Kitts Hill home.

The children are toting kittens and running about, as kids will do, and the Pattersons calmly watch them play.

It could be a scene out of Mike Patterson’s own childhood and it is one he may have wondered at times in the past if he would enjoy again.

But he will tell you God has blessed them with four children, seven-year-old twins Eli and Ethan and two five-year-old daughters Nadia and Jayda, and on this Father’s Day, he has much to be thankful for. He is a dad.

Kids of his own

Mike Patterson, who is Lawrence County’s Clerk of Courts, and his wife, Lisa, tried for several years to have biological children. But sometimes nature is not cooperative.

Still, some people feel they are just meant to be parents. So it was with Mike and Lisa Patterson.

“My wife came to me and said, ‘what do you think of adoption?’ And I said that would be fine with me,” Patterson said. “We prayed about it before we did it. Then we left it in the Lord’s hands. You know, the Bible says we are received into Christ by the spirit of adoption.”

They began working with Lawrence County Children’s Services and first became certified as foster parents. The Pattersons have taken in 15 foster kids over the past several years, some for a week, some for longer, and that number included a baby or two.

“We got one little baby in foster care. She was born and we picked her up at the hospital four days later,” Patterson recalled. “We just fell in love with her. We enjoyed getting up at night (to care for her). We had her nine months and you talk about tough when it came time to give her up.”

Foster parenting led to adoption. First came the twins in 2006, then Jayda in 2007 and Nadia not quite two years ago.

The Pattersons still marvel at how well their kids have adapted to them and to their new home and family. Even the quiet Nadia, whom they first met at a church function.

“At first she wouldn’t talk at all but I started to talk to her and I told her she was a princess and the next thing I knew she was sitting on my lap,” Patterson said.

Adoptions of older children require a transition period, to make sure the prospective parents and the kids bond. There are day-long visits, overnight visits and eventually short stays at the adoptive parents’ house.

Patterson had happy memories of his childhood, memories of eight children shepherded by two loving parents, Mary Gene and the late George Patterson, and an upbringing filled with love and solid Christian values.

These are the very things he is determined to pass on to his own kids. He is keen to provide family-centered activities the kids can one day look back on with happiness and pride. And it’s sometimes the simplest things that can make the most cherished memories.

“When we first got the boys, I’d get on the riding lawn mower and kick the blade off and they’d take a few laps with me and after a few laps they’d fall asleep and Lisa would have to come out and get them,” he mused.

Dad likes watching his kids do things he did when he was a kid: Walking in the woods, playing hide and seek in the yard after dark on warm summer nights and catching lightning bugs and playing in the creek behind their house. Afternoons are frequently filled with sports practice: The kids play and Dad is a coach.

“When he was coaching baseball, football was coming up and I asked him if he would coach it, too and he said ‘I don’t know how I can not do it,’” Lisa Patterson said.

Sundays are family days. After church, the Pattersons often head to Grandma Mary’s house for dinner.

“We walk if its not raining,” Patterson said, pointing out his mother lives a short distance down the road.

Occasionally he takes one of his kids into the office at the Lawrence County Courthouse with him, though he admits with a grin at least one of them would be a rather lenient boss.

“I took Ethan with me one day and he told all the girls in the office to take the day off,” he mused. “I like to work but I love coming home to family,” he said.

The kids have made it clear that if their dad loves them very much, the feeling is mutual. They find it hard to sleep at night until they get their hugs and kisses.

“If he’s not home, they lay in there and listen for his car and when they hear them, they start saying, ‘Daddy’s home,’” Lisa said.

There are a few things Patterson is viewing with some trepidation: The thought of his kids driving someday, and one responsibility that is perhaps a bit daunting right now.

“One thing I’m no good at is fixing the girls’ hair,” he laughs.

As Dad sits down on the front porch, two kids crawl into his lap, both hauling kittens. Patterson looks over at Lisa, whose own lap is full, and he is obviously happy. This is the home life they both dreamed of. A short time later, he pauses for a moment to watch Ethan and Nadia in a battle with a toy squirt gun and a large plastic crayon.

“People say ‘there are kids who need homes,’” Patterson said, “and I say, ‘We were two people who needed kids.’”