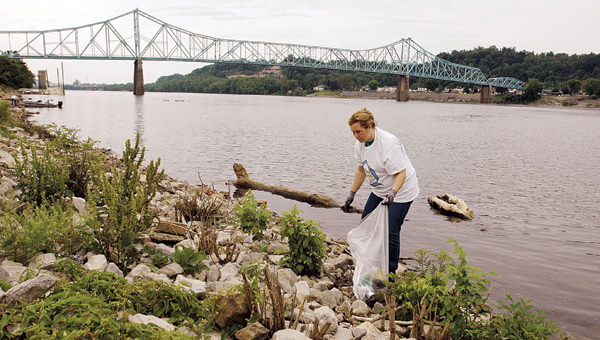 THE TRIBUNE/JESSICA ST JAMES April Reed picks up garbage in between the rocks and growth at the Center Street Boat Landing early Saturday in downtown Ironton during the annual Ohio River Sweep.

With ducks and geese noisily paddling off the shoreline and a fisherman in a bass boat casting his line into the waters of the Ohio River, the view at Ironton’s Center Street Landing Saturday morning was very nearly idyllic — and that’s the way the volunteers who lined the river banks with trash bags in hand want it to stay.

All along the Ohio River, thousands of volunteers collected trash and debris during the annual Ohio River Sweep. The cleanup is sponsored by the Cincinnati-based Ohio River Valley Water Sanitation Commission and focuses on all 1,962 miles of shoreline in Illinois, Indiana, Ohio, Kentucky, West Virginia and Pennsylvania.

In Lawrence County, volunteers selected three sites for cleanup: the boat docks in Ironton and South Point and the one on Symmes Creek at Chesapeake. Mary Rose, with Boy Scout Troop 103 and Cub Scout Pack 103, was at the Ironton site bright and early.

“This is very important to us,” Mary Rose said. “I’m a member of The Grange and I started working this as a community service project. Then my grandson got into the scouts and now I’m involved on two levels. We’re trying to keep the river clean because it’s a vital part of our economy and recreational facilities. Ashland’s boat dock was closed for a while and this one (in Ironton) really got used.”

This year, Coca Cola became a major sponsor of the cleanup and brought along soft drinks, tents, employee volunteers and recycling bins as well as door prizes for the participants.

“Coke is trying to get back into the community,” Coca Cola’s Mike Payne explained.

The river sweep started in 1989. Last year, about 20,000 volunteers participated.