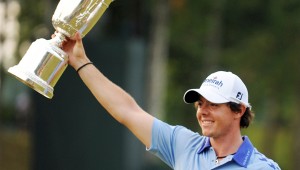 Rory McIlroy holds up the U.S. Open championship trophy, after winning the U.S. Open with a score of 16-under par at Congressional Country Club in Bethesda, Maryland, Sunday. (The Ironton Tribune / MCT DIRECT)

BETHESDA, Md. — Rory McIlroy buried the memory of his Masters meltdown the same way he buried the competition at the U.S. Open, with a breathtaking performance filled with the promise of more majors to come.

Four days of flawless golf at Congressional ended Sunday afternoon with a 2-under 69 to shatter U.S. Open records that simply defy logic at the major known as the toughest test in golf.

The 22-year-old from Northern Ireland walked off the 18th green and into the arms of his father, Gerry, who worked three jobs so his only son could pursue his passion. Not even he could have imagined a day like this.

It was the second straight U.S. Open title for the tiny country of Northern Ireland, and defending champion Graeme McDowell walked back across the bridge to the 18th green to embrace the new winner.

“You’re a legend,” McDowell told him.

Not many would dispute that now, not after a week like this.

McIlroy finished at 268 to break the U.S. Open record by four shots. That record 12-under par by Tiger Woods at Pebble Beach? McIlroy matched it in the second round and kept right on rolling, finishing at a staggering 16 under.

“I couldn’t ask for much more, and I’m just so happy to be holding this trophy,” McIlroy said. “I know how good Tiger was in 2000 to win by 15 in Pebble. I was trying to go out there and emulate him in some way. I played great for four days, and I couldn’t be happier.”

When he arrived for his press conference, he took a picture of the silver U.S. Open trophy on the table and posted it on Twitter with two references that said it all: Winning. Bounceback.

His freckled-face bursting with joy when he tapped in for par, McIlroy won by eight shots over Jason Day, who closed with a 68 and moved to No. 9 in the world. It was the second straight runner-up in a major for Day, only this time he didn’t have a chance.

No one did this week.

McIlroy opened with a three-shot lead, stretched it to six shots after 36 holes and eight shots going into the final round. No one got any closer over the final 18 holes.

Tributes poured in throughout the steamy afternoon outside the nation’s capital — first from the players he beat, then from Jack Nicklaus and ultimately from Woods.

“What a performance from start to finish,” Woods said in a statement. “Enjoy the win. Well done.”

Nicklaus invited McIlroy to lunch last year in Florida and talked to him about how to close out tournaments. He apparently wasn’t listening when he took a four-shot lead into the final round of the Masters, only to implode on the back nine and shoot 80.

“I didn’t think it was going to happen again, and it hasn’t,” Nicklaus said by telephone to NBC Sports. “I think this kid’s going to have a great career. I don’t think there’s any question about it. He’s got all the components. He’s got a lot of people rooting for him. He’s a nice kid. He’s got a pleasant personality.

And to think that only four days ago, this was being called the U.S. Wide Open with no clear favorite in the game. Woods has gone 18 months without winning and isn’t even playing now because of injuries to his left leg. The top two players in the world have yet to win a major. There appeared to be no one who stood out in the game.

McIlroy, who goes to No. 4 in the world, now stands above everyone going into the final two majors of the year.

Just think: If he had avoided the collapse at Augusta National, he could be headed to Royal St. George’s for the British Open with the first two legs of the Grand Slam.

“Nothing this kid does ever surprises me,” McDowell said. “He’s the best player I’ve ever seen. I didn’t have a chance to play with Tiger when he was in his real pomp, and this guy is the best I’ve ever seen. Simple as that. He’s great for golf. He’s a breath of fresh air for the game, and perhaps we’re ready for golf’s next superstar.

Among the records he set in a U.S. Open unlike any other:

— Quickest to reach double digits under par — 26 holes when he got to 10 under in the second round.

McIlroy also tied Woods’ record for a six-shot lead at the halfway point, and he joined Lee Janzen in 1993 and Lee Trevino in 1968 as the only players to post all four rounds in the 60s.

Some of that had to do with Congressional, which was softened by rain and cloud cover. The USGA did nothing to try to protect par, moving tees forward to tempt players to take on some risk. The result was a whopping 32 rounds under par on Sunday. The previous record of 18 final rounds under par was at Baltusrol in 1993.

But there is no denying that one guy played far better than anyone else — eight shots better. McIlroy became the first player since Woods in 2002 at Bethpage Black to go wire-to-wire in the U.S. Open without ties, and his best might still be ahead of him.

“I think he’s still growing, and it’s just scary to think about it,” said Y.E. Yang, who played in the final group the last two days.

Amid the celebration of McIlroy came growing concern about the state of American golf. For the first time since the Masters began in 1934, Americans have gone five majors without winning. They were on the verge of being shut out of the top three for the fourth time in the last five majors until Yang made bogey on the last hole for a 71.

That put the South Korean into a tie for third with PGA Tour rookie Kevin Chappell (66), Robert Garrigus (70) and Lee Westwood (70).

“It says, I think, that the Americans struggle a little bit,” PGA champion Martin Kaymer said. “Since Tiger has been on a — how you do say? — little down, nothing has really happened. We’ve just become so much stronger.”

The game also is getting much younger.

McIlroy became the fourth straight player in his 20s to win a major, the longest such streak since 1897.

The drama Sunday was not who would win, but by how many.

There was simply no catching McIlroy, not when he was staked to an eight-shot lead while playing flawless golf, not on a soft course that allowed him to hit wedge into six greens on the front nine.

With chants of “Let’s go, Ror-eee” coming from the massive gallery, and teenagers climbing pine trees to see golf’s bright new star, McIlroy came out firing with a wedge that settled 8 feet from the pin for an opening birdie.

Twice when he faced putts from across the green, he holed 7-footers for par. He stretched his lead to 10 shots, and when he made the turn, his tee shot on the par-3 10th rolled down the slope and stopped inches away from an ace.

The way his week had been going, it was shocking not to see it fall.

He didn’t make a bogey until the 12th hole, when he failed to get up-and-down from short of the green, and he had his only three-putt of the championship on the 17th hole. McIlroy made worse than par on only four of 72 holes.

The Associated Press CINCINNATI — Miguel Cairo got the pitch he expected, right where he thought it would be. Cairo... read more