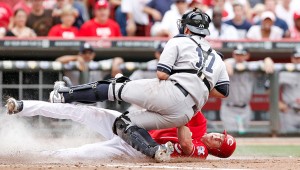 Cincinnati’s Drew Stubbs slides safely into home plate to score a run in the fifth inning under the tag of New York Yankees’ catcher Francisco Cervelli (17) Wednesday afternoon at Great American Ball Park in Cincinnati during the first game of a day-night doubleheader. The Reds lost 4-2 but won the nightcap 10-2. (The Ironton Tribune / MCT DIRECT)

CINCINNATI (AP) — Teammates forced Chris Heisey to take a curtain call after the third homer. The capacity crowd chanted his name in unison.

Finally, some runs. And a young leadoff hitter had provided most of them.

Heisey got Cincinnati’s slumping offense going with his first multihomer game, and Johnny Cueto allowed only two hits in seven innings Wednesday night, leading the Reds to a 10-2 win and a doubleheader split with the New York Yankees.

In the opener, Jorge Posada ended the second-longest homer drought of his career with a two-run shot, sending the Yankees to a 4-2 win.

Heisey started the second game with his first career leadoff homer. He also had two-run shots off Brian Gordon (0-1) and Hector Noesi. After his homer in the eighth, Heisey was forced to take a curtain call and heard his name ring through the ballpark.

“That was a good night,” manager Dusty Baker said. “That might get our offense rolling.”

“When you get a hit in your first at-bat, it takes the pressure off the rest of your day,” Heisey said. “It relaxes you. Nobody likes to go 0 for 4 or 0 for 5. One home run’s a good day, let alone three.”

Cueto (5-2) gave up Nick Swisher’s solo homer and Alex Rodriguez’s single. The right-hander pitched out of a bases-loaded threat in the seventh, retiring Posada on a groundout to preserve a 4-1 lead.

Cueto has given up only four runs in four June starts. He was scratched from a start Monday in the series opener because of a sore neck. He stretched it sideways as he walked off the field after fanning Rodriguez in the first inning, an indication it was still bothering him a bit.

Couldn’t tell by his pitching. He retired 12 straight batters over one stretch, putting the Reds in line for only their second victory in nine interleague games.

Gordon had problems in one of the majors’ most homer-friendly ballparks.

The 32-year-old journeyman left the Phillies’ farm system last week to sign with the Yankees, who need help for their depleted rotation. He impressed in his first start, giving up two runs in 5 1-3 innings of a win over Texas.

The second time wasn’t so good.

Gordon showed Heisey his two best pitches leading off the first inning, throwing a 69 mph curve followed by a 90 mph fastball. Heisey then connected on a sloppy, full-count fastball. Gordon gave up five hits — three of them homers — and four runs in five innings.

“I’m definitely a little disappointed in the outcome,” Gordon said. “I made three mistakes and paid for all three of them.”

The Yankees won the first game without Rodriguez or first baseman Mark Teixeira in the starting lineup. Posada played first base and made the difference.

Posada’s tiebreaking homer off Mike Leake (6-4) ended his stretch of 126 at-bats without one. His last homer was April 23.

“I don’t know when’s the last time I hit one, but I wasn’t trying to hit one,” Posada said. “They happen for me. I don’t care when they do happen. I’m happy they are, but I’m not going out trying to hit a home run.”

Posada had been through a lot since his last homer, losing his DH job, getting dropped to ninth in the order and having to apologize for taking a day off.

Garcia allowed three hits in seven innings while improving to 22-10 in 39 career interleague starts. The right-hander is 4-0 in four career starts against the Reds, all of them in Cincinnati and all of them for a different team. He played for the Mariners, the White Sox and the Phillies in the first three.

Mariano Rivera pitched the ninth for his 19th save in 22 tries. He has a record 66 career saves in interleague games, including 22 straight since 2006.