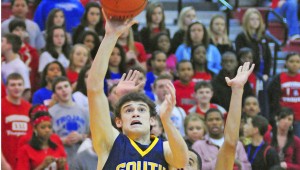 SOUTH POINT — Blake Barnes is known for his shooting from long range. He’s taken that to even greater lengths.

The South Point Pointers’ senior guard signed a letter-of-intent to play basketball at Olivet Nazarene University in Bourbonnais, Ill., located about an hour from Chicago.

Barnes said he doesn’t have a problem being so far from home.

“You have to do what’s best for you,” said Barnes. “I love my family and being home, but the opportunity may only arise once for me to play at a high level. I have to do what is best for me. My family will always be there for me.”

It was family that helped get Barnes hooked up with ONU coach Ralph Hodge. The Pointers’ head coach is Chris Barnes who happens to be Blake’s father.

“My dad sent out some film and stats and they came down and watched me work out,” said Blake Barnes. “They asked me to come up and work out with the team and I went up to Chicago and it all went well. I love the school.”

Dad was impressed with the school and the program.

“The have great facilities, a very strong basketball tradition, and it’s the summer home of the Chicago Bears (of the NFL),” said Chris Barnes.

The 6-foot-1 Barnes — a two-time Associated Press all-district and All-Ohio selection — scored 1,091 points in his career. He was first team All-Ohio Valley Conference twice as well as a Coaches All-District 13 first team selection.

With his ability to score from the outside and run the offense, Barnes figures to get playing time at either the point or shooting guard positions for the Tigers.

“They have a senior point guard and they want someone to come in and back him up. But because of my size and the way I shoot, they would like to have both of us on the floor at the same time,” said Blake. “I would basically be playing both roles for them.”

Barnes capped his high school career by being selected to play in the Ohio High School Basketball Coaches annual North/South All-Star Game and he led the South team with 23 points.

“I am very humbled and grateful for the opportunity to attend ONU and I would like to thank all those involved in the decision-making process,” said Barnes.

Blake — the son of Chris and Peggy Barnes of Ironton — plans to major in science education and eventually become a physician’s assistant.

Reds use home runs to power way by Baltimore, 10-5

BALTIMORE (AP) — Maybe it was because the air was hot and still, or perhaps it was just that the... read more