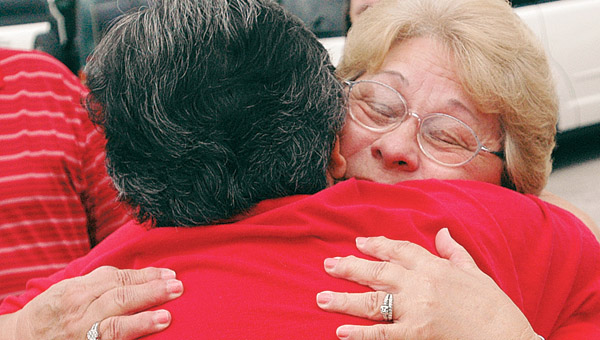 Bonnie Allen receives a hug from a friend before the start of a road dedication in honor of her son. THE TRIBUNE/JESSICA ST JAMES

COAL GROVE — In a solemn ceremony Saturday, family, friends and village and county officials honored the life and service of someone they call a true American hero.

The Coal Grove Village Council and Lawrence County Commission unveiled one of the signs that would also stand to honor the hero.

Marion Pike, the main thoroughfare in Coal Grove, was renamed the Sgt. Justin Bradley Allen Memorial Parkway, for the young soldier who was killed in the line of duty last year.

On his fourth deployment as an Army Ranger, 23-year-old Allen, a team leader assigned to Company D 1st Battalion 75th Ranger Regiment, was killed this past July during a combat mission in Afghanistan.

“Everyone knows Justin is a true American hero,” said county commissioner Les Boggs before the ceremony. “It is an honor to see this road dedicated in his name.”

Sorkin, with tears in his eyes, spoke about Allen. Having driven by his grave in Woodland Cemetery, Sorkin said there were three things represented there that he remembered most about the soldier: his 10-gallon hat, his boots and the angel on his grave that reminded him of the wings on Allen’s back.

Sorkin said there was a fourth thing he would also remember.

“I’ll always remember his heart,” he said. “That’s what made him so special.”

Roger Allen said he was thankful for the ceremony for his son and the support from people in the village.

“It’s something that everybody doesn’t get to experience,” he said. “I’d give back all my experience to get my son back. I think anybody would.”

Bonnie Allen said she wanted to thank the commission and the village mayor and council for the ceremony and dedication.

“It was incredible, such an honor,” she said.

Bonnie proudly wore a pin with a picture of her son that she wears often. She also wore a bracelet with his name.

Coal Grove Councilman Bob Self said he was pleased with the turnout for the ceremony.

McDaniel thanked everyone who participated and the county commission for purchasing the road signs, placed on Marion Pike at each end of the village limits, to honor Allen.

“Hopefully we can do more in the future to honor our veterans.”