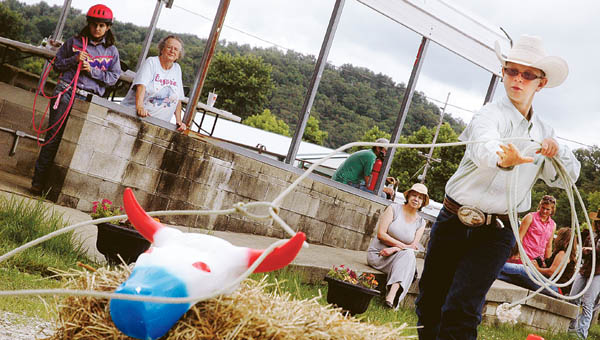 Stephen Orengo competes in the ground roping competition during a horse show at the Ohio University Southern Horse Park Saturday.

4-Hers compete to see who will go to the fair

FRANKLIN FURNACE — Jazmine Hammond of Ironton tried the rest, but chose the best. That’s how she sees spending her free time in the riding arena.

“My mom made me do a bunch of piano and that dance stuff. I never liked it,” Jazmine, 11, said. “I loved horses and told her I wanted to ride.”

And ride she did Saturday at the Ohio Horse Park as she competed to see if she could get a ticket to the Ohio State Fair Horse Show later this summer.

Perched atop Gigi, her 6-year-old quarter horse, Jazmine had already gone through one barrel racing competition and was waiting for her second.

The fast-paced in and out across the outdoor arena shooting her horse around barrel after barrel is “like awesome,” Jazmine said. “But if I hit a barrel, it makes me feel sort of sad.”

In the reviewing stands were Jill Newman and Daren Wright, 4-H qualified judges, timing each rider as she raced through the course, adding on a penalty when a barrel got toppled.

Riders from Lawrence County’s Silver Spurs 4-H Club had to qualify in two of four competitions to get to Columbus — barrel racing, Western showmanship, hunter under saddle and poles.

“They need to work well with their horse,” Newman said. “They and the horse need to be one and know the 4-H rules.”

“It’s just competing against yourself,” said Koch who rides both Western and English.

Her performance on Saturday earned her the Debbie Corder Williams Hunter Under Saddle Memorial Trophy for 2011.

This was the last season for Kelly Rudmann of Ironton to compete as a 4-Her. But she plans to continue her career showing in adult classes. It’s the adrenaline rush that keeps her coming back for barrel and pole competitions.

“It’s the rush to get fast, the speed,” said Rudmann, aboard Dreams of Poco, aka Trip for short. “To be able to get a faster time.”

Qualifying for shows is nothing new for Rudmann who this year got a berth for the world championship for the National Barrel Horse Association in Jackson, Miss.

“Before I did barrels, I showed English,” she said. “With barrels, it’s the speed. English, it’s more elegant. Barrels is about the easiest technically. It’s the speed. You have to be able to sit your horse.”

The morning was for the youth, but the adults were enthusiastic rail-sitters cheering on everyone whether the performance was a win or a miss.

“Just getting kids involved with horses, you are getting them away from trouble,” Newman said. “Horses are a good thing.”

An Ironton man was arrested early Saturday morning in connection with the vandalism of a South Ninth Street apartment; two... read more