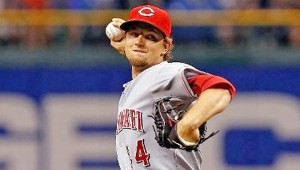 Cincinnati Mike Leake releases a pitch against the Tampa Bay Rays during the game at Tropicana Field on Monday in St. Petersburg, Fla. Leake pitched six innings for the win as the Reds got a 5-0 victory. (The Ironton Tribune / MCT Direct Photo)

Gomes, the former Rays outfielder playing at Tropicana Field for the first time since becoming a free agent after the 2008 season, hit a solo shot off an overhanging catwalk during a two-run fourth that made it 4-0. Brandon Phillips, who had four hits and two RBIs, added a run-scoring single off Jeremy Hellickson (7-7) later in the inning.

“I really wanted to play him here against his former team,” Reds manager Dusty Baker said of Gomes. “It was a good night for him and hopefully he’ll hit a couple more before we get out of here.”

Gomes has hit nine fair balls off the catwalks, the most at the St. Petersburg ballpark since it opened in 1998. Many in the announced crowd of 19,891 cheered for Gomes, a popular figure when he played for Tampa Bay from 2003-08, after his home run.

“I felt good, but I kind of took a little step back as far as mechanics,” Leake said. “I was a little disappointed on my first-pitch strikes. But putting up zeros, you can’t complain.”

“Our pitching is coming around big-time,” Baker said.

Hellickson lost his fourth consecutive start, giving up four runs and eight hits in six innings. During the right-hander’s skid, Tampa Bay has been outscored 20-1.

“That was a bad game,” manager Joe Maddon said. “We just aren’t, offensively, playing the same game here. The answer, I don’t know what it is. I honestly don’t.”

Cincinnati went up 2-0 in the first when Phillips drove in a run with a double and Jay Bruce hit an RBI single. The Reds had lost six of nine.

Bruce, who missed Sunday’s game with flulike symptoms, was back in the lineup and went 1 for 4.

Tampa Bay ran itself out of a promising inning in the sixth. With two on and no outs, Matt Joyce hit a flyball to left that turned into double play when Evan Longoria, the baserunner at first, ran past the lead runner, Ben Zobrist, for an automatic out. Casey Kotchman then hit an inning-ending grounder.

“He doesn’t make too many mistakes, but that was a little gift for me,” Leake said.

Longoria thought left fielder Fred Lewis was not going to run the ball down.

“I was convinced it was going to get down,” Longoria said. “He tracked it down and we all know what happened.”

NOTES: Gomes has three homers in his last five games. … Baker was involved in a game at Tropicana Field for the first time. “Quite new for me,” he said. “Quite new for a lot of us.” … Longoria also was charged with an error at third for misplaying Paul Janish’s fourth-inning grounder. … Baker said C Ryan Hanigan (lat muscle) could be in the lineup Wednesday. … Hellickson struck out nine and walked one. … The Rays are 0-7 against Cincinnati, the only team they have never beaten.

Staff Report By the end of last season, Terrell Owens’ career with the Cincinnati Bengals appeared to be over. With... read more