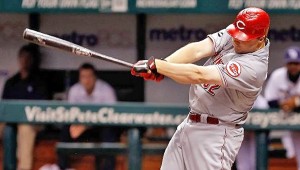 Cincinnati outfielder Jay Bruce connects for a game-tying home run in the top of the ninth inning on Tuesday against the Tampa Bay Rays. The Reds lost 4-3 when Evan Longoria homered in the bottom of the inning. (The Ironton Tribune / MCT Direct Photo)

Evan Longoria hit a game-ending solo homer in the ninth inning to give the Tampa Bay Rays a 4-3 victory over the Reds on Tuesday night.

Cincinnati is 11-17 this season in games decided by one run.

“These are tough to take and we have had quite a few of them,” manager Dusty Baker said. “We will get over that hump someday.”

Longoria sent an 0-1 pitch from Logan Ondrusek (3-3) into the left-field seats for his fifth homer in the last eight games. The previous four in this power stretch occurred on the road — the All-Star third baseman has just three homers and four RBIs in 24 games at Tropicana Field in 2011.

“We played a great game,” Baker said. “We just came up short.”

Johnny Damon homered and drove in three runs for the Rays, who have won nine of 11. It was the first time in eight tries that Tampa Bay beat the Reds.

Jay Bruce connected in the top of the ninth for the Reds, tying it at 3 with a leadoff drive against Kyle Farnsworth (2-2). It was Bruce’s 18th of the season and it ended a drought of 84 at-bats without a homer.

Cincinnati’s Johnny Cueto gave up three runs and four hits in 7 2-3 innings. The right-hander had won his previous three starts, allowing two runs in 21 innings during that stretch.

“I don’t talk too much about winning or losing,” Cueto said. “I went in there and did my job. My job was pitching today.”

Cueto retired 10 in a row before allowing consecutive one-out singles in the eighth to John Jaso and Sam Fuld.

He retired Reid Brignac on a flyball before Bill Bray entered and allowed Damon’s bloop, two-run double that landed just out of the reach of diving left fielder Chris Heisey and gave Tampa Bay a 3-2 advantage.

The Reds had scored two runs in the top half of the inning to take the lead. Drew Stubbs got it started with a triple off David Price, who took a perfect game into the fifth. Stubbs scored on Edgar Renteria’s single, and Joey Votto added a tiebreaking RBI double with two outs.

Price tied a career high with 12 strikeouts while yielding two runs and six hits in 7 2-3 innings.

Damon got the first hit off Cueto, a leadoff homer in the fourth. Damon has gone deep nine times this season, one more than all of last season with Detroit in 145 games.

Price struck out four of his first five batters, with the final three — Votto, Scott Rolen and Bruce — all going down on fastballs that the scoreboard radar gun had at 97 mph.

Jonny Gomes became the Reds’ first baserunner when his hard, one-hop liner with two outs in the fifth went off the glove of Brignac, who attempted a backhanded grab at shortstop. It was first ruled an error, then changed to a single later in the game.

Ramon Hernandez followed with a single to right that advanced Gomes to third. But Price struck out Stubbs to end the inning.

Brandon Phillips doubled and Votto walked with two outs in the sixth, but Price got a grounder from Rolen on a 3-2 pitch.

NOTES: Cueto has held opponents to 0 for 19 with runners in scoring position over his last four starts. … Damon, with 2,653 hits, is one away from tying Ted Williams for 71st place on the career list. “That’s probably going to be the most special on the list,” Damon said. “I think Ted Williams is top for me.” Damon played four seasons with the Red Sox, including the 2004 World Series championship team. … Phillips finished 1 for 4 on his 30th birthday. … Renteria has 899 career RBIs.