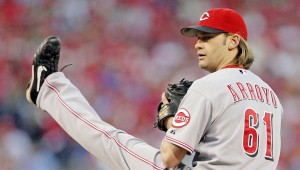 Cincinnati pitcher Bronson Arroyo will be the starter as the Reds host the Cleveland Indians on Friday night to begin a three-game series. (The Ironton Tribune / MCT Direct Photos)

CINCINNATI — The Cleveland Indians had the best record in baseball after their first matchup of the season with the Cincinnati Reds. They’ll be happy just to have the top record in their division following the next one.

The Indians have struggled since sweeping the Reds in May, and they’ll look to get back on track with another strong performance against their in-state rivals beginning Friday night.

Cleveland opened 30-15, with three of the wins coming in a home sweep of Cincinnati from May 20-22. The Indians followed that series by rallying for a 3-2 win over Boston in a nationally televised game, but they but haven’t been ready for prime time since, going 12-22.

Despite those struggles, Cleveland (42-37) is battling Detroit for the AL Central lead.

The Indians will try to build on a strong finish to their six-game road trip. After getting swept by San Francisco, they took two of three from Arizona, getting 15 hits in a 6-2 victory Wednesday.

Orlando Cabrera had a season-high four hits and is 8 for 14 with three doubles over his last four contests.

Asdrubal Cabrera has gone 7 for 17 with four RBIs during that same stretch. The shortstop had a career-high five hits, two homers and five RBIs during the May 22 finale against the Reds, a 12-4 victory.

The Indians have dropped eight of 10 at Great American Ball Park. Cincinnati is 5-10 in interleague play, though it did take two of three on the road from Tampa Bay in its last series.

After missing three games because of a sore lat muscle, catcher Ryan Hanigan hit a three-run homer to give the Reds a 4-3 victory Wednesday.

“Hopefully, I think we’re closer,” Hanigan said. “We’re starting to play better baseball. I think guys are upbeat. I think if a few things go right for us we can make a little push here.”

The right-hander gave up five runs on four homers over 6 1/3 innings at Baltimore on Saturday, but Cincinnati won 10-5. Arroyo had a three-start win streak against the Indians snapped with a 5-3 home loss June 27, 2010, when he gave up four runs in five innings.

Cleveland’s Justin Masterson (5-6, 2.98) will be hoping his teammates score some runs for him as he looks to snap an 11-start winless drought. The right-hander has posted a 3.34 ERA during that span but has received eight total runs of support.

Masterson gave up one unearned run in 6 2/3 innings against the Giants on Saturday but suffered a 1-0 defeat.

“We know how good he’s pitching. The numbers are there,” manager Manny Acta told the team’s website. “We don’t grade these guys or pay that much attention to wins and losses because we know there’s only so much they can do.”

HAMPTON, Ga. (AP) — Chad Ochocinco turned to NASCAR on Thursday in his ongoing search for thrills away from the... read more