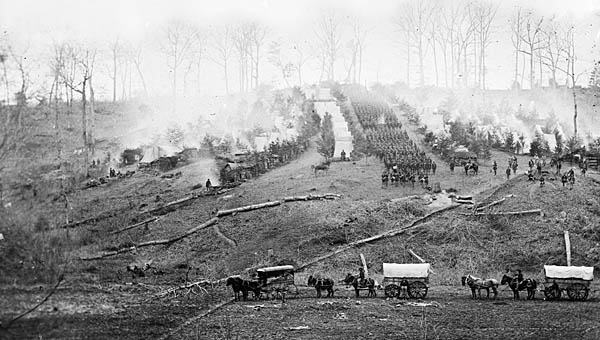 Conscription is defined as “compulsory enrollment of persons, especially for military service.” Even before the Civil War Era, people referred to this process as simply “the draft.”

There had never been a general military draft in the United States until the Civil War. The Confederate States of America passed the first of its three conscription acts on April 16, 1862, about one year into the War.

Almost a year later, the United States began conscription. Men serving for both governments regarded the draft as the only method of sustaining soldier-numbers. All drafts are instituted to inspire voluntary enlistments.

The public, in general, grew angry about the draft, as many saw it as an attack on one’s free will and personal liberty. There was a widely held belief that men forced to serve in the War would not make good soldiers. Volunteer soldiers, in the beginning, did not mix with or trust men produced by the draft.

With all of the battle losses the United States sustained in the first two years of the War, the draft was defined as an act of desperation. It was advantageous to the United States to know that it possessed a larger population base from which to draft.

The Confederate draft was seen as an immediate necessity. When the War first began, patriotic fervor brought many men from both sections to the enlistment tables. The compulsory-service was very unpopular in the South because it appeared the Confederacy sought to strip men of their rights, one of the major reasons why the South seceded and went to war originally.

Under the first Conscription Act, all healthy white men between 18 and 35 were eligible for a three-year term or obligation. This act further expanded the terms of enlistment for all one-year soldiers to three years. In September of 1862, as the South seemed to be winning most battles, an amendment to the Conscription Act increased the age limit to 45.

As things got much worse for the Confederacy in February of 1864, the range of years was changed to those men between 17 and 50. The expression “from the cradle to the grave” was born south of the Ohio River.

Conscription naturally brought on the by-products of substitutes, bounty jumping, and desertion. Exemptions from fighting brought on charges of class discrimination by both warring governments. Southern exemptions for need on the home front might exclude railroad and riverboat workers, civil officials, telegraph operators, miners, druggists, and teachers.

Great resentment arose in the South when a provision in the Conscription Act exempted from military service the overseer or owner of any plantation with 20 or more slaves. This was the famous “Twenty-Negro Law.” Southern legislators revised this law in May of 1863 to demand payment of an exemption fee of $500 and sworn testimonies from two witnesses swearing that the overseer of Negroes had been employed at that task before April 16, 1862.

The number 20 was lessened to 15 Negroes in 1864. Ninety-two percent of all military exemptions for state service came from Georgia and North Carolina.

On March 3, 1863, Lincoln signed a law implementing the first general United States draft. The appeal called for men 20-45 to enroll in local militia units that would later be called into national service in the Union armies.

Married men could be drafted between the ages of 20 and 35. Men with mental disabilities or with certain categories of dependents were exempted. Physical disabilities that stated individual exemption were listed as follows: “bad vision in the right eye, lack of front teeth and molars, and loss of more than one finger on the right hand, and more than two fingers of the left hand.”

The responsibility for actually drafting men for the United States armies belonged to the states themselves and they used a numbered lottery system.

A Northerner could avoid the draft by paying $300 to the federal government. Also, a United States male could hire a substitute to go in his place. A Southern law in 1863 made “the substitution process” illegal in the Confederacy. In 1861, a male who volunteered for the Union army received $100.

In 1864 if a man volunteered in New York City, he was given $375 plus a federal bonus. In 1864 in Lincoln’s State of Illinois, a man could receive $1,056 in enlistment fees and local and state bounties. In the United States during the early 1860’s, $500 was about the average yearly wage for such males.

Young boys with a dislike of farm work and a desire to have “great fun” were easy prey for professional substitute brokers. In northern cities, kidnappers sought out immigrants. A drink of whiskey followed by a blow to the head would result in the victim coming to wear a blue uniform in any army camp around Washington.

The bounty system also produced “professional bounty jumpers.” These men, a majority of them Northerners, would enlist with great patriotic display, collect their bounties, desert at night, and join up again somewhere else and collect more bounty.

John O’Connor held the record for “bounty jumping.” He admitted signing up and leaving 32 times before being arrested. This “bounty jumper” gave four years of his life to the prison system.

He would only sign up for a three year military obligation when “bounty jumping.”

This weekend we celebrate Memorial Day. Cookouts, family, and of course, the longest running parade in America are all things... read more