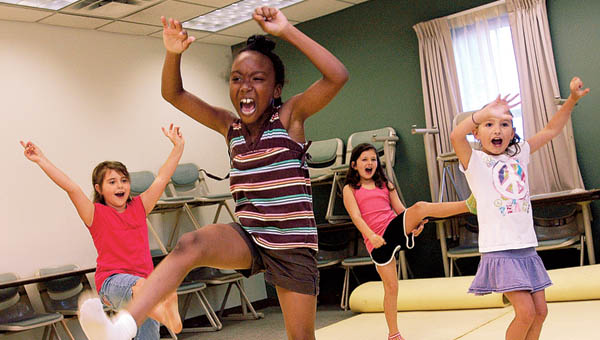 Amari Washington, up front, along with her classmates learn to cheer while attending the Academy of Excellence in the class Got Cheer? at Ohio University Southern.

What do dancing, horseback riding, art and dissecting cow eyes have in common?

They are all things students at the Academy of Excellence have been doing this week.

There are 131 students enrolled at the two-week camp held on the campus of Ohio University Southern at the campuses of Ironton and Proctorville. With week one under their belts, organizers and instructors said the camp has been running smoothly and the children are learning a lot.

Lisa Cantrell, a coordinator for the camp, said a few of the week’s activities have had the children buzzing with excitement.

“They really enjoyed dissection the cow eyeball and the cat,” Cantrell said. “It grossed a few of them out at first, but they got into it.”

But after all, that is the name of the class: Gross!: Dissection and Crime Lab. Not only are the children dissecting, but they are also learning the techniques used to solve a murder.

The CSI class, Creative Science Investigators, have a lot on their hands as well. The class is investigating the murder of Chris Cecil’s lab assistant.

“The children will solve the crime by taking finger prints and DNA samples and looking for evidence,” said Cecil, instructor for the class.

The Ironton Police Department was also at the scene of the crime Friday to help the students gather evidence. At the end of the camp next week, the culprit will be arrested, Cecil said.

Not everything at the Academy of Excellence is crime and science related. Some of the classed are all about having fun.

Toni Markins instructs the Girls Just Want to Have Fun class. The class combines a little of everything: arts and crafts, coking, scrap booking and Zumba.

Markins is in her fourth year of teaching at the Academy.

“I just want them to have fun and get experience doing things they wouldn’t normally get to do at home,” she said. “It’s real life learning in a fun way.”

Real life learning is something many of the students want to take away from the camp as well.

Emily Arvaugh, 12, chose photography as one of her classes, taught by Chris Hayes.

“I was on the yearbook (staff) last year and I plan on being on it again,” the Ironton Middle School student said. “I wanted to learn how to take good photos.”

The class incorporates the use of cameras as well as Photoshop software.

Savannah Bryant, 13, is in the photography class too, and agreed she wanted to learn how to take better shots. She has been participating in the Academy of Excellence since she was in the first grade and said she has had more fun each year.

“I hope they take away more of an interest in learning and also the experience of being on a college campus,” said Leslie Wheeler, on-site coordinator for the camp. She also hopes the camp will motivate the students to go to college as well.

“I like to sew and design my own clothes,” Macy said, noting that she learned how to sew at last year’s camp.

Projects for the class include designing T-shirts and sew skirts and making jewelry.

The Academy of Excellence will conclude Friday with closing events both Thursday and Friday at 6:30 p.m. in the Mains Rotunda on campus. There will be art shows, plays, dance routines and presentations and parents will be able to visit the different classrooms.

A 24-year-old South Point man will spend the next three years in prison for unlawful sexual conduct with a 13-year-old... read more