If you live in the 1300 block of Fourth Street in Ironton, you probably don’t know what it’s like to walk into the polling place and see a long line of voters ahead of you. Voting probably only takes as long as it takes to read the ballot and punch out your choices.

That’s because that precinct, known at the board of elections as 3C, only has 160 registered voters.

It is the smallest of the 25 precincts in Ironton that take care of the 9,335 voters registered in the city. The next largest is 2B that takes in the blocks on Park Avenue near the U.S. 52 exit and has only 176 voters. In fact, the largest precinct, 1F, in the north end of the city has only 606. Most of the city precincts average two to three hundred voters.

County Treasurer Stephen Burcham who lives in the eastern end knows what it’s like to wait in line to vote. During the last presidential election Burcham stood for two hours before he could cast his ballot. 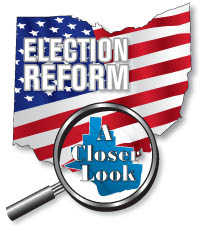 Come the next presidential election voters in Ironton might want to see if Burcham has any tips for whiling away a couple of hours at the polls. That’s because a newly passed election overhaul bill at the state level is shaking things up, mandating that each precinct in the state have a minimum of 500 voters.

That means the number of Ironton’s precincts will be cut. The lines they are a changin’.

On Wednesday the Ohio House passed a law that, besides the precinct mandate, will change when the state holds it presidential primary to May and reduce the period for early voting, among other items. The governor is expected to sign it.

The law has the support of Secretary of State Jon Husted.

“This comprehensive elections reform package will help modernize the state’s elections system and make it easier for Ohioans to register to vote and have their votes counted,” Husted said in a statement.

But what will it do locally?

“It will save the county taxpayers money when it comes time to run the election,” County Auditor Jason Stephens said.

If Stephens could have his way, he’d cut the county’s 84 precincts down to 56. In fact, almost two years ago Stephens, when he was a county commissioner, went to the board of elections with that proposal.

The savings from that could range from $40,000 to $20,000 annually depending on if there was a primary that election year, he said.

“Forty thousand dollars, that pretty much takes care of a new (police) cruiser,” he said.

It was a change the board of elections turned down.

With the new law overall Lawrence County could lose between 9 to 14 precincts depending on who is making the calculation. Chesapeake and South Point would also be affected, but all agree the lion’s share of cuts will hit Ironton.

Take all the registered voters and divide by the 500-voter minimum and you get 18 precincts. That’s how Mark McCown, secretary of the Democratic party and a member of the board of elections, sees the change being implemented.

“The minimum loss would be seven,” McCown said.

It will be up to the four-member board of elections to determine how the new precincts are created, whether by redrawing the lines or combining neighboring precincts into a single polling place.

“We will work with the board,” Cathy Overbeck, board of elections director, said. “It looks that all but one (in Ironton) is under at this time. That would probably cut (the number) in half. It could reduce it by seven or eight. I don’t know (the approach) until we have a directive from the secretary of state. This is like it was in 2001 when we had the census and we had to redraw the lines. This is on a smaller scale, but it is still a big task.”

But adding more voters to each polling place is only one facet of the new mandate. The Democrats and Republicans elect the members of their governing body or central committee from each precinct in the county. With 84 precincts that means there are 84 Republicans and 84 Democrats elected to determine party policy and appointments. Now with that number cut, how much will it affect the politics of the county?

“It would not affect the Democrats in Lawrence County as much as the Republicans because of the way each party organizes,” McCown said. “Both parties’ (central committee) devolve into an executive committee. The Democratic party adds individuals to that committee.”

Any elected central committeemen lost from the overhaul could be appointed to the Democratic executive committee.

“It will not have any effect on us to speak of,” Craig Allen, chair of the Democratic party and board of elections, said. “It might make a difference on the Republican side, if they don’t appoint people to the committee.”

Recently the Republican committee had to choose a successor to Stephens on the county commission when he was elected auditor. It was a choice between a candidate from the Ironton area and four from the eastern end. One of the eastern end candidates won by a simple majority after three ballots were cast.

“On the first ballot, a lot was by area,” Ray “Moose” Dutey, Republican party chairman, said. “When it was down to the final three, they were three good candidates. I think that would be with the new alignment, it would be on qualifications and knowing the committee. It is just according to who the person is. … It is more the person’s qualifications and ability and knowing the committee.”

As fellow Republican and party vice chair Stephens sees it, the biggest impact of the mandate will be on how much it costs to run an election.

Right now there are 32 precincts in Upper Township. That includes 24 from Ironton.

“When they put a levy on or an actual election, they have to pay their portion of 32 precinct workers,” Stephens said. “They don’t have that much (property) tax revenue. It really hurts their budget.”

Poll workers are paid on average between $130 to $100 an election depending on their responsibilities. But there are more expenses than paying four workers per precinct. There are costs for ballots and advertising.

Anything that has to do with the election other than the salaries of the four on staff at the board office is charged back to each municipality, township and school district depending on what is on the ballot. A countywide election charge-back can go as high as $100,000, according to Eric Bradshaw, deputy director of the elections board.

“Fewer precincts in the county would save the taxpayers,” Stephens said. “Whenever you are trying to stretch any penny, these are the kind of reforms that enable government entities to deal with budget cuts. You walk into the polling place and they have six different tables with six different precincts. This (bill) is making common sense. I am glad the legislature has passed it and put some common sense into our election laws.”

A recycling container is not a dumpster, a South Point man learned the hard way Friday. Willis B. Young, 61,... read more