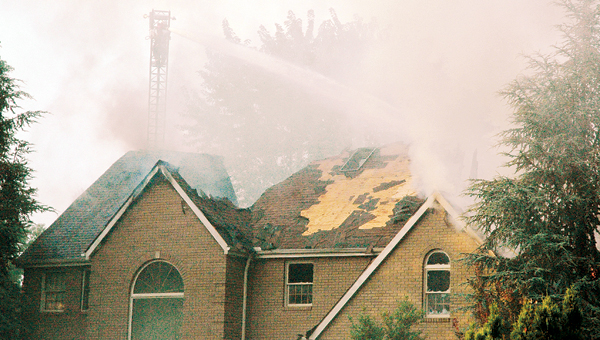 A firefighter from Green Valley Fire Department is on a ladder fighting the blaze that damaged a house in Roman Harbor in Rome Township Tuesday. THE TRIBUNE/JESSICA ST JAMES

The cause of the fire has not yet been determined. The name of the homeowner was not immediately available.

Rome Township Assistant Fire Chief Steve Rutherford said firefighters were called to the County Road 107 residence just before 5 p.m. and some remained on the scene until after 1 a.m. this morning.

“When we got there, there was heavy smoke coming from the roof peak,” Rutherford said. “One of the reasons we called for assistance was the size of the house. It was a three-story house and we knew it would require a lot of manpower.”

In addition to Rome, firefighters from Proctorville, Chesapeake and Burlington fire departments in Lawrence County responded to the call, as did Green Valley and Ohio River Road fire departments in Cabell County, W.Va. Green Valley brought a ladder truck, which was instrumental in fighting the blaze because of the size of the house, Rutherford said.

Rutherford said fighting the blaze was difficult from many perspectives. The size of the house required two water sources.

Rutherford said the third floor sustained the bulk of the damage. However, the second floor was also heavily damaged while the first floor sustained mainly heat and water damage.

Two State Fire Marshal’s Office investigators are on the scene today to determine the cause of the blaze.

Rutherford expressed gratitude to the firefighters from the other departments who gave mutual aid. He also expressed his thankfulness to members of the community who stepped forward to help those battling the blaze.

“We saw people who don’t even like the fire department bringing cases of bottled water for the firefighters, bringing wet towels (to help cool off firefighters),” Rutherford said.

Rutherford said he hoped the fire prompts people in the community to realize how important volunteer fire departments are and step up to support them.