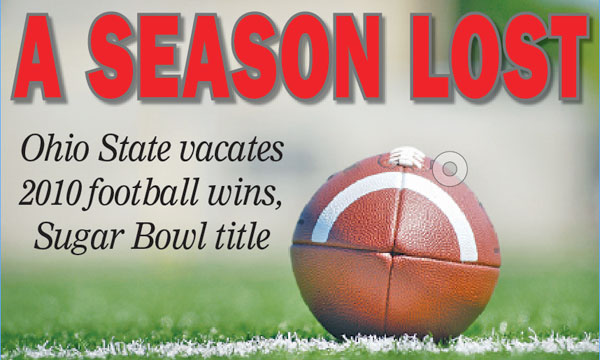 Ohio State’s 2010 Big Ten championship, its 12-1 season, its victories over rival Michigan and in the Sugar Bowl — all gone. Coach Jim Tressel is out and so is star quarterback Terrelle Pryor.

COLUMBUS (AP) — Ohio State’s 2010 Big Ten championship, its 12-1 season, its victories over rival Michigan and in the Sugar Bowl — all gone. Coach Jim Tressel is out and so is star quarterback Terrelle Pryor.

The question now is whether it will be enough to save Ohio State football from more severe penalties in an upcoming trip to see the NCAA committee on infractions.

In response to NCAA violations committed by football players who traded autographs and memorabilia for cash and tattoos — and by a coach who covered it up — Ohio State issued its official response on Friday. Athletic director Gene Smith hoped it would appease the NCAA ethics police.

The measures taken by the school included vacating all the Buckeyes’ wins from last season, a year in which Ohio State captured a record-tying sixth straight Big Ten title and won an unprecedented seventh straight game over Michigan.

“Might the NCAA do more? I just can’t speculate on that.”

Tressel found out in April 2010 that his players were

taking improper benefits from a local tattoo-parlor owner. Despite contractual and NCAA obligations to report it, he didn’t tell anyone at the university or the NCAA for more than nine months. And what was just a five-game suspension for five players suddenly blossomed into a major violation that included a coach knowingly playing ineligible players throughout the 2010 season.

“Coach Tressel acknowledged that when he received the information, he knew the players could not sell the memorabilia or receive preferential treatment,” Tressel said through his attorney in response to the allegations. “He also understood that the university policy called for him to notify the compliance office regarding possible violations. He has explained his thinking at the time, but offers no excuses here for his decisions.”

In a reversal, Ohio State — which earlier said it had asked for Tressel’s resignation on May 30 — said Friday it had now agreed to allow him to call it a retirement. The school also said he did not have to pay a $250,000 fine levied against him for his actions. On top of that, Tressel will receive the last month of his base pay ($54,000), has agreed to cooperate when Ohio State goes before the NCAA infractions committee on Aug. 12, and both he and the university agreed that they wouldn’t sue each other.

Tressel’s attorney, Gene Marsh, confirmed to The Associated Press earlier Friday that the former coach, who led the Buckeyes to the 2002 national title, would be on hand in Indianapolis when Ohio State gets its day with the NCAA.

Smith said there was no evidence whatsoever that anyone at Ohio State other than Tressel had any knowledge of the players’ violations before January of this year.

The response to the NCAA doesn’t mean Ohio State’s woes are over. The governing body for college sports could still impose tougher sanctions, such as a ban on postseason play and a reduction in scholarships. The NCAA is expected to hand down its sanctions six to eight weeks after the August hearing.

Even though many Buckeyes fans blame the school’s compliance department for the violations, Smith said it had done its job. He promised adjustments to how athletes are monitored and educated, but said he was not displeased with compliance director Doug Archie or anyone else on his staff.

He said compliance would use “a lot of different strategies” to do a better job.

“We’ve looked at precedents around the nation for similar types of violations and sanctions that were imposed, either by the (NCAA) or self-imposed,” he said. “These seem to be quite consistent.”

The scandal unfolded in two stages. First, OSU officials were told of the memorabilia trading and sales in December and suspended five players for the first five games of 2011 and one player for the opener.

They had frequented a tattoo parlor and had sold autographs, signed equipment, championship rings and even a bowl sportsmanship award — all contrary to NCAA bylaws which prevent athletes from profiting off their name or fame.

Then in January, the university learned that Tressel had known about the violations since April 2010. After backing him for weeks, the university pressured him to resign on Memorial Day.

Smith said a continual drumbeat of revelations and allegations all but forced Ohio State to “separate” from Tressel. He said he was stunned when he learned of Tressel’s deception.

“You never know, but we’ve done a lot of due diligence,” said John Bruno, faculty athletics representative. “We looked weeks to months to find something else and nothing has come up.”

Pryor was among the original group of players who was suspended for the first five games of this year. But he left OSU to try his luck in the NFL soon after Tressel quit. The NCAA added a five-game suspension for yet another player earlier this week.

Interim coach Luke Fickell said his players, in the midst of summer conditioning, have accepted many of the changes he has implemented in the program but no one knows how they’ll respond when the sanctions are finalized.

“I think they’re buying in but you don’t know,” he said. “Until other adversity and other situations happen, you’ll see what happens.”

Coal Grove’s Caleb McKnight maneuvers through the L-drill. In the movie “The Maltese Falcon,” detective Tom Polhaus picks up the... read more