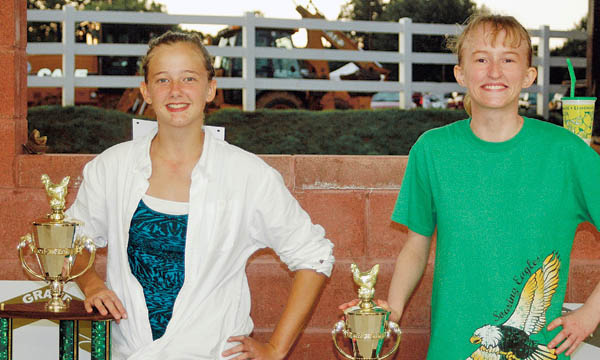 ROME TOWNSHIP — By the time the evening was over, Brooklyn Blakeman and Brianna Schneider had a judge’s stamp of approval on their market chicken.

For Schneider, this was her first attempt at showing chickens. Both women said they were nervous about the competition.

Just before the market chicken competition, Kimberly Schneider earned both first and second place in the fancy poultry show with her pair of Partridge Wyandottes. How do you raise a winning pair of fancy poultry?

“Keep them out of drafts and direct sunlight,” Schneider said.

In the market chicken showman competition, Chris Wilson walked away with the senior trophy and Kim Schmidt the junior trophy.

Wilson said controlling a pair of poultry isn’t difficult if you employ one little secret:

“I put my fingers behind its neck and it sits there,” he explained.

Schmidt said she just tried to smile and be nice to her fowls.