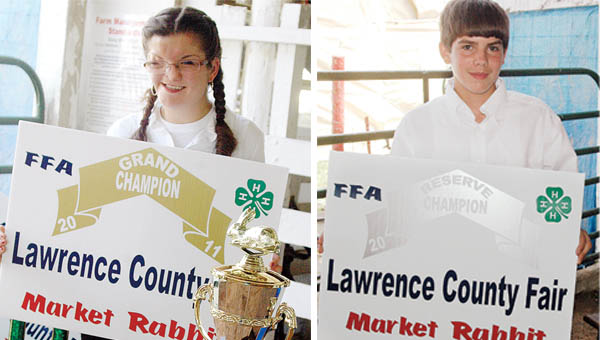 A veteran champion and a first-time competitor took the top honors for the market rabbit show that opened Monday’s competitions at the Lawrence County Fair.

This was the third time for Shelby Haas to take the grand champion prize. Haas, a sophomore at Cedarville College studying social work, also won in 2006 and 2007.

“It is very overwhelming,” Shelby said. “It takes a lot of work to make sure they have good food and clean water.”

The victory was bittersweet since this was the last year for Shelby to compete in 4-H.

“This is my favorite part of the summer,” she said. “To get to hang out with my friends and show all the hard work we do.”

This was the first year for Drew Redmond to compete, pulling in the reserve champion prize for his New Zealand whites.

“I’m excited,” he said. “It takes a lot of practice and a lot of work.” Drew is an eighth grader at Ironton schools.

About two hours into the show, outside the brand new rabbit barn, Katie Webb stood waiting for her class to be called into the arena. She candidly admitted she had a good case of nerves.

“It’s really good,” she said. “The rabbits won’t get overheated.”

Stroking her New Zealand whites that she had just oiled down with baby wipes, Webb said she is hoping for a good score.

A half hour later, Katie pulled third place in her class.

Nine-year-old Savanna Carmon was the youngest to take first place in her class and to compete for the grand champion prize. She entered a pair of black-eared Californians.

The Rock Hill student is a member of the Lawrence County Copperheads.

“My heart was pounding,” she said when the judge called out her name. “I thought I was dreaming. I wanted that trophy.”