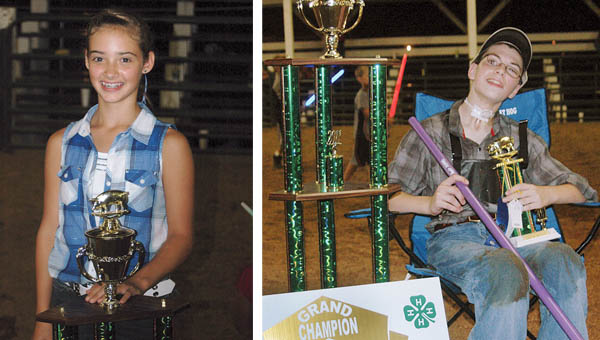 “(It’s) awesome,” McMackin said of his win. McMackin has been showing hogs for two years he said.

The 15-year-old and his hog beat 125 other animals to get top honors at the show, which went off without a hitch a little later in the evening than planned. The show was pushed back two hours to 8 p.m. because of the heat.

McMackin’s cousin, Kyle Evans along with John Ferguson helped him raise his hog, which is known as the Undertaker.

McMackin is paralyzed on one side of his body and has both a tracheotomy tube and a feeding tube.

Molly Saunders, a 12-year-old Dawson-Bryant student, was the reserve champion of the market hog show. Molly said her younger brother and sisters helped raise the hog with her.

She said she was nervous and anxious during the show. She ultimately knew she had won when the judge made a comment about her hogs’ “crinkled” ears. He said that the winning animal didn’t need to be perfect and then pointed out the ears, she said.

“I was just stunned,” she said. “I just let the pig wander off.”

Molly said taking care of the hog has been hard work. She’s had to bathe it, clean its pen, feed it and otherwise care for it, she said.

A week ago, the county’s board of elections received 235 petitions seeking to put a referendum eliminating the controversial Senate... read more