ROME TOWNSHIP — For her last year as a 4-Her, Shelby Haas of Kitts Hill was a winner all the way around. On Monday Shelby took grand champion with her New Zealand rabbits.

On Wednesday she became the senior market rabbit showman, capturing the judge’s attention as she met the handling and knowledge facets of the competition.

“You have to practice with them a lot so they can get used to you,” said Shelby, now a sophomore at Cedarville College. 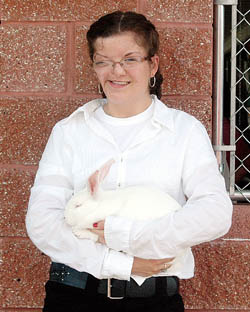 Shelby started working with her rabbits in June, getting up each morning at 7:30 a.m. to check on the pair making sure they have water and feed. Then throughout the day she would go out to the barn to make sure they were not overheated.

Later on in the day was when Shelby would work with the rabbits so she could handle them for both competitions.

“In the late evening when it is cool, and it isn’t too hot,” she said. “(The heat) is not good for their health.”

A few weeks before the fair, Shelby would weigh her rabbits every other day to make sure they stayed within the 3 to 5 pound weight limit.

“4-H is really a good way to learn about animals and you meet a lot of people,” she said. “It is a good way to connect with other people.”

Judge Travis West from Vinton County told the competitors they should consider themselves guides for the younger participants.

“Be mentors for the younger kids,” West said. “Pass your knowledge onto the other generation of Lawrence County 4-Hers.”

First Baptist of Ironton to have 5K run Saturday

First Baptist Church of Ironton will have its first 5K run/walk beginning at 8 a.m. Saturday. It will begin and... read more