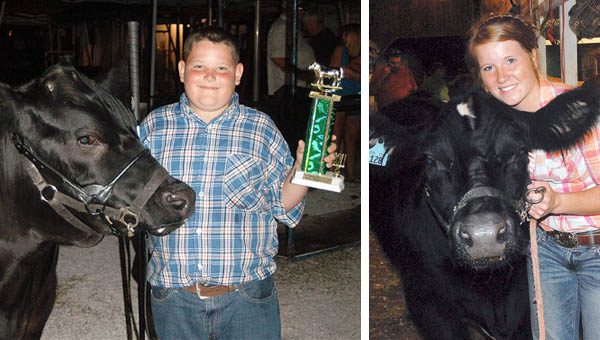 (LEFT) Chad Morris, 11, of Kitts Hill, was all smiles after he won first in the junior steer showmanship competition. (RIGHT) Casey Walker, 17, of South Point, won the senior cattle showmanship award with her calf “Culo.”

The cattle expert of this year’s Lawrence County fair, Wolf said of those in the running for the showmanship award, “These are the kind of people that make the calves look right. I’d be satisfied to have any one of them leading my animal.”

Winner of the junior cattle showmanship award, Chad Morris, was all smiles before he was even named the winner.

Wolf said as soon as the 11-year-old from Kitts Hill entered the ring, he had a “let me at ‘em attitude” and an eagerness to show is animal.

Chad said, simply, he was happy about his win, and was smiling ear-to-ear.

When asked what he liked best about showing his steer, “Tater,” he said, “All of it pretty much.”

“She worked for a year for this,” her father, Steve, said. “She worked real hard at it.”

Casey has been showing animals since she was 9 years old and said she was very happy about the win. She also said it was hard knowing that she would have to let her steer, “Culo,” go up on the auction block.

Even though Casey said it was hard every year to let her animal go, she said she still enjoys the experience.

“Showmanship is my favorite thing,” she said. “It’s more about me and the animal.”

Both Casey and Chad will compete in the showman of showmen event.