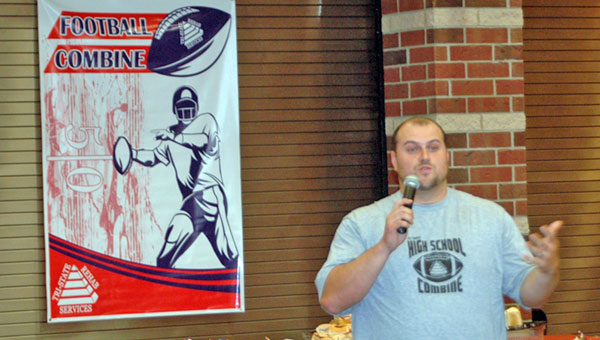 Former Ohio State fullback Tyler Whaley talks to the players attending the football combine about the importance of working hard and having a dream. - The Tribune/ Jimmy Walker

Sitting at their tables, eating their lunch, the new wave of high school football players had an eagerness in their eyes.

Tyler Whaley understood that look and he made sure that it became more than just a passing expression.

Players attending the combine have aspirations of playing at the next level. Whaley encouraged them to strive to make that dream a reality, much like he did when he was sitting on the other side of the microphone.

“I was told I was ‘too short, too slow, we’re not even going to look at you.’ Don’t let that discourage you. It starts with this right here. You got out of bed and came here. That’s the first step. But keep working. Set goals for yourself,” said Whaley.

Too short? Whaley laughed about how one year he was listed at 6-foot-1 in the Ohio State Buckeyes football media guide.

That lack of height kept college coaches looking in other directions. But Whaley was bound and determined to make them see him.

Whaley’s determination got him to Ohio State as a preferred walk-on with the help of Ironton coaches Bob Lutz and Mike Burcham and former Ironton player and Ohio State assistant coach Mark Snyder.

But just because he was on the squad didn’t mean anything to the coaches. It was more like, “Glad to have you. We needed some practice fodder.”

Playing at Ohio State was Whaley’s dream since he was a young boy. He turned down offers to play at lower level schools such as Marshall in order to pursue his dream.

The dream often turned into a nightmare.

“There were plenty of times I called home and said to my mom (Tammy Voglesong) that I’m done and she said ‘No, give it time.’”

Whaley did give it more time. He eventually earned a full scholarship his junior year and he became the team’s starting fullback for the 2007 season when the Buckeyes played in the BCS championship against LSU.

During the 2005 season, Ohio State played in the Fiesta Bowl and Whaley — then a center — remembers a blocking drill and going against linebacker Anthony Schlegel.

Whaley handled Schlegel on the first snap and linebacker coach Luke Fickell — now the Buckeyes’ head coach — watched the play and commented, “Whaley one, Schlegel nothing.”

The two went against each other again with the same results. Fickell said, “Whaley two, Schlegel nothing. Whaley, I can’t believe you’re not on scholarship.”

“I was told I couldn’t make it, but I wanted to prove to myself and those who said I couldn’t make it that they were wrong. Once you reach a level, you always have another level to strive for. There are no comfort levels. You have to push through,” said Whaley.

After getting his scholarship, Whaley challenged for the starting center position but he was 5-10, 270, not 6-4, 305 like Jim Cordle.

But Whaley did get some playing time his senior year when he was asked to lose some weight and move to fullback where he helped Ohio State to an outstanding season and earned himself a free agent contract with the Cincinnati Bengals.

“I got to live my dream. It is obtainable to make it at Ohio State or Marshall or wherever you fit in. You might not be right for Ohio State or some other school you want, but don’t let anyone tell you that you can’t make it somewhere.”

Tyler Whaley meant what he said. You could tell by the look in his eyes.

There it was, the first sign of the high school football season. I’m not sure about the exact day and... read more