An Anniversary of Vows 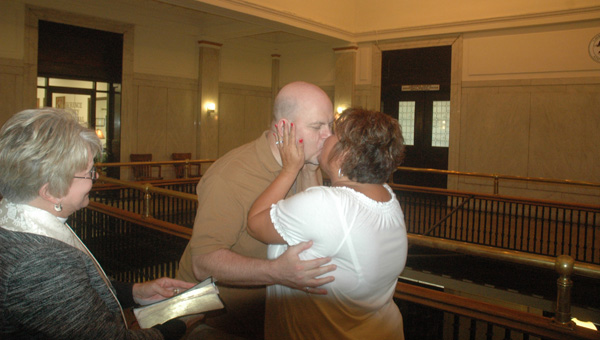 Grace Baisden and Eric Leibold share their first kiss as husband and wife following their wedding in the Lawrence County Courthouse. At left is the Rev. Sallie Schisler who officiated at the ceremony. The Tribune/Benita Heath

Even the Chihuahua knew it was the time to be still. As his mistress Grace Baisden followed in the footsteps of her beloved grandparents, Peka knew this was the time for solemnity.

On Monday just a little after 2 p.m. Baisden married her fiancé, Eric Leibold, under the gold-leafed rotunda dome of the Lawrence County Courthouse. It was the same place where Baisden’s maternal grandparents, Weldon and Dixie Miller, were married 70 years ago to the day.

“I think this was very romantic,” Baisden said after the ceremony performed by the Rev. Sallie Schisler of Christ Episcopal Church. “I loved my grandparents. This was just the way I thought it would be, much more than what I thought.”

Baisden and Leibold drove down from Norwalk, outside Sandusky, the day before to be married in the courthouse, a place Baisden used to visit each summer when she spent her holiday with her grandparents.

“They loved each other so much,” she remembered.

Every July 18, Baisden and a cousin would drive into Ironton with their grandparents just so Dixie and Weldon could walk through the courthouse, remembering that happy day.

Joining the wedding party, besides Peka, decked out in a denim and floral pinafore, were Baisden’s mother, LauraNell Baisden, and her sister, Sandy Ramons, who gave the bride away.

County commission administrator Tami Meade provided the couple with their first present as husband and wife – a woodcut replica of the courthouse created for its centennial three years ago.

Schisler, who is the rector of the church across the street from the courthouse, was called in at the last minute after Baisden’s minister was unable to accompany the wedding party.

“In the old Anglican tradition, the parish was the neighborhood that you lived in and the parish church existed to serve the needs of that neighborhood,” Schisler said. “Our neighborhood contains among other things the courthouse so when I got the call to do this I said yes. That is part of ministering to people in our neighborhood. For a grandchild to come back to recreate that wonderful memory by having a ceremony of their own, I think that is wonderful. Participating in that was a privilege.”