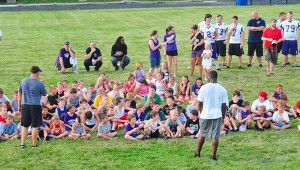 CHESAPEAKE — Football camps teach a lot of things, but coach Kevin Hutchinson wanted to make sure one specific point was emphasized above all others.

“The biggest thing is to show them that football is fun,” said Hutchinson who not only works with the Chesapeake Youth Football Little League but is also a Chesapeake High School assistant coach.

This is the third year for the Lil’ Panther football camp that is for players playing in the A, B, C and D leagues.

A total of 68 youth attended the first day of the three-day camp on Thursday.

“It really surprised me how many we had considering how hot it was and with other kids still playing (little league baseball) all-stars,” said Hutchinson.

Coaches from the youth league, middle school and high school volunteer to work the camp along with the junior and senior members of the high school football team.

The camp helps provide a connection between the youth and the varsity levels.

“We try to run the base offense that our varsity runs with the kids,” said Hutchinson.

Hutchinson said the players were not only helpful with their instruction, but he said it also supplied some excitement.

“They are the shock factor,” said Hutchinson. “The kids are in awe of them. They think they’re something else. I know when I take my kids to Marshall games they ask what number they are so they can see who came to the camp.”

With the heat and even a rain that fell on Friday night, Hutchinson said the players’ enthusiasm never wavered.

“I have to give it to them. They went as hard as they could,” said Hutchinson.

You might be a Cincinnati Reds’ fan if you have a No. 1 foam finger in one hand and a... read more