Life in a Museum 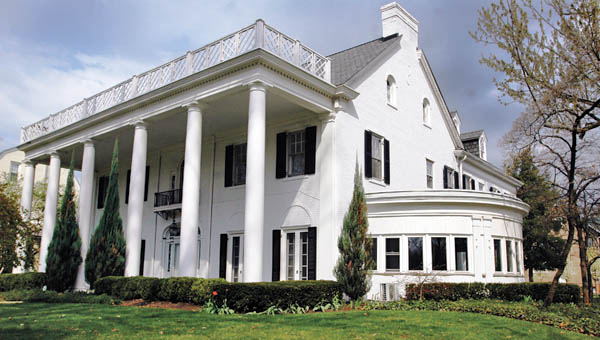 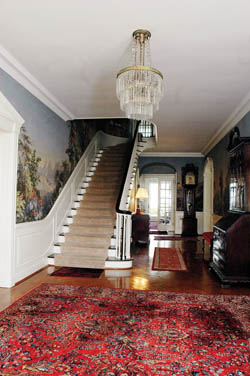 It’s not easy being caretaker of a museum. But that is one of the duties Jane Kopp faces with grace and aplomb as Marshall University’s latest first lady.

About six years ago Stephen Kopp took over the presidency of the Huntington university and with the job came a house already furnished, at least the downstairs part of it. Maintaining the elegance and formality of those rooms while making a home for her and her husband has become Jane Kopp’s mission.

It’s in the public rooms where the Kopps entertain guests of the university, faculty and students. Those are the rooms filled with antiques given by supporters who want to make the President’s House on 13th Avenue by Ritter Park a showcase.

“People have donated to the university or left them in their estate,” Jane Kopp said. “It’s a big responsibility, but the university provides staff to take care of the home.”

Built in 1922, the three-story brick features a square portico on the front and an enclosed side porch. Attorney and one-time Huntington mayor Charles Campbell built the house that was designed by the Huntington architectural firm of Sidney L. and R.L. Day in a combination of Neoclassical and Greek Revival.

The spacious entrance hall features the original French hand-blocked wallpaper, mounted on panels and then installed on the walls. Called El Dorado, the design shows a fanciful world of castles with lush foliage and aviary life and was created in Rixheim, France by the firm of Zuber and Cie.

On the left of the hallway is the formal dining room the Kopps use when entertaining university guests. Here the style of the room is strictly federal with two Hepplewhite sideboards in the familiar curvilinear shape dominating. Above the onyx marble fireplace, one of seven in the house, is a vivid mural still life of foliage and parrots, painted by Louis Chappell. The panel is original to the house.

The design in the mural is picked up in the cushions on the dining room chairs and draperies where magenta parrots dance across an eggnog cream background.

“I would like to see more color in the room,” Kopp said. “My husband would like it to reflect Marshall and its colors.”

A massive breakfront holds the white and gold-banded china used for Marshall functions.

Across the entrance hall from the dining room is the formal living room, paneled in a rosy mahogany-esque wood. The focal point of the room is the oil portrait of U.S. Supreme Court Chief Justice John Marshall, for whom the university is named. The painting was done by university professor E.E. Myers after a portrait by Henry Inman.

It is here in the living room, also used for formal occasions, that the special touches of Kopp come alive with family photographs on display. In a recessed bookcase are examples of Fenton and Blenko glass, the latest interest of Kopp.

“I’ve fallen in love with the glass made in this state,” she said.

Upstairs are the private rooms that include four bedrooms, two offices and a sitting room on the second floor and a modified ballroom with only an eight-foot ceiling.

“Other first ladies had their sewing clubs there,” she said.

A small downstairs study is also a refuge for the Kopps along with the enclosed side porch with planters and pots of house plants.

“Steve and I eat out here on weekends,” Kopp said. “This is a great room to grow plants. The breakfast room is claustrophobic.”

But antiques and architectural details aside, it is the location across from Ritter Park that seems to capture Kopp’s imagination the most.

“Last week the cherry trees were just gorgeous,” she said. “It is a gorgeous view. Every season. And the colors that came from the trees in the fall, it made everything glow.”