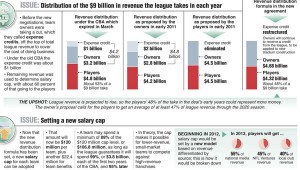 WASHINGTON — After months of public nastiness and private negotiations, of court filings and rulings, of players and owners squabbling over more than $9 billion a year, NFL fans finally saw the handshake and heard the words they awaited: “Football’s back.”

NFL Commissioner Roger Goodell and NFL Players Association head DeMaurice Smith both used that phrase while standing shoulder-to-shoulder Monday, announcing their agreement on a 10-year deal to end the lockout that began in March.

Then came what may truly be the lasting image of the dispute’s resolution: Indianapolis Colts offensive lineman Jeff Saturday wrapped one of his burly arms around New England Patriots owner Robert Kraft and enveloped him in a hug — a gesture that symbolized the acrimony’s end more than any statement could.

“I’d like, on behalf of both sides, to apologize to the fans: For the last five, six months we’ve been talking about the business of football — and not what goes on, on the field, and building the teams in each market,” Kraft said. “But the end result is we’ve been able to have an agreement that I think is going to allow this sport to flourish over the next decade.”

Owners can point to victories, such as gaining a higher percentage of all revenue, one of the central issues — they get 53 percent, players 47 percent; the old deal was closer to 50-50. There’s also a new system that will rein in spending on contracts for first-round draft picks.

Players, meanwhile, persuaded teams to commit to spending nearly all of their salary cap space in cash and won changes to offseason and in-season practice rules that should make the game safer.

One important compromise came on expanding the regular season from 16 to 18 games, which owners favored. That can be revisited for the 2013 season, but players must approve any change.

“Both parties were trying to stand their ground — and rightfully so,” said Vikings linebacker Ben Leber, one of the 10 named plaintiffs in the players’ antitrust suit against the league that will now be dropped. “In the end, against all the negativity that was out there publicly, they took their time and hammered out what I think is going to turn out to be one of the best deals in the history of sports.”

An interesting choice of phrase, given that Smith and some players grew fond of calling the owners’ last offer before talks fell apart in March “probably the worst deal in sports history.”

Here was Smith’s take Monday: “We didn’t get everything that either side wanted … but we did arrive at a deal that we think is fair and balanced.”

Now comes frenzied football activity, starting immediately. Club facilities will open to players Tuesday, when 2011 draft picks and rookie free agents can be signed, and teams can begin talking to veteran free agents. Training camps for some teams may begin as soon as Wednesday.

“Chaos,” said Jets fullback Tony Richardson, a member of the NFLPA’s executive committee. “That’s the best word for it.”

Only one exhibition game was lost: the Hall of Fame opener between the Bears and Rams, scheduled for Aug. 7 in Canton, Ohio.

“Our players can’t be more excited about going back to doing the thing they love the most,” NFLPA president Kevin Mawae said. “We always said during this process we would do a deal when it’s right and when it’s the right deal. Our players did that. We stuck it out to the end.”

When Saturday spoke to reporters, he offered an eloquent tribute to Kraft, lauding him as “a man who helped us save football,” and to Kraft’s wife, Myra, who died Wednesday from cancer.

“A special thanks to Myra Kraft, who even in her weakest moment allowed Mr. Kraft to come and fight this out,” Saturday said. “Without him, this deal does not get done.”

Kraft, meanwhile, took a verbal jab at the nearby White House and Congress, saying: “I hope we gave a little lesson to the people in Washington, because the debt crisis is a lot easier to fix than this deal was.”

Owners overwhelmingly approved a proposal to end the dispute Thursday, but some unresolved issues needed to be reviewed to satisfy players. The sides worked through the weekend and wrapped up nearly every detail by about 3 a.m. Monday on a final pact that runs through the 2020 season and can’t be terminated before then.

That’s significant because the old collective bargaining agreement contained an opt-out clause, and owners exercised it in 2008. That led to the contract expiring when talks broke down March 11; hours later, owners locked out the players, creating the NFL’s first work stoppage since 1987 — and longest in league history.

“I know it has been a very long process since the day we stood here that night in March,” Smith said in a brief appearance about 20 minutes before being joined by Goodell and three owners. “But our guys stood together when nobody thought we would. And football is back because of it.”

As he spoke, Smith was surrounded by some players, including Saints quarterback Drew Brees, one of 10 plaintiffs in the antitrust lawsuit that players filed against the league March 11. Two unanimous NFLPA leadership votes cleared the way for that case to be dropped and the lockout to go away: first, to recommend to the plaintiffs that they accept the settlement; second, to recommend that all 1,900 players re-establish the union.

All players now will take a vote to re-certify the union — it was dissolved March 11, turning the NFLPA into a trade association — and then one more vote to approve the final CBA. It all needs to be wrapped up by Aug. 4 to make everything official, something everyone involved believes will happen without a hitch.

Only once it is back to being a union can the NFLPA finish the contract, covering remaining items such as player discipline, drug testing, disability programs and pensions.

Several people involved in the negotiations praised Goodell and Smith for working with each other to try get the sides to arrive at a deal.

“If we don’t have a good relationship, it hurts the game and the business of football,” Smith said. “I’m not sure any two people have ever come together in a more compressed, public, interesting time than Roger and I.”

Now get set for a wild week.

On Tuesday, clubs can begin talking to veteran free agents, who can sign as soon as Friday. On Wednesday, training camps will start to open.

The major economic framework for the deal was worked out more than a week ago.

That included dividing revenue; a per-club cap of about $120 million for salary and bonuses in 2011 — and at least that in 2012 and 2013 — plus about $22 million for benefits; a salary system to rein in spending on first-round draft picks; and unrestricted free agency for most players after four seasons.

“If I don’t have to hear the word ’lockout’ for a long time, I’ll be happy about that,” Arizona Cardinals receiver Larry Fitzgerald said. “I know guys are ready to get back to work.”

The Associated Press CINCINNATI — Who’s the quarterback? How do two arrests change the depth chart? And what do they... read more