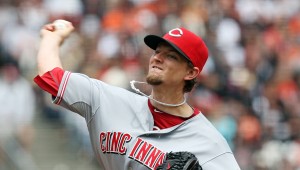 Cincinnati's Mike Leake pitched well but the bullpen faltered and he was saddled with the loss as the Reds fell 4-2 on Monday to the New York Mets. (The Ironton Tribune / MCT Direct Photos)

The Reds haven’t won three in a row since they swept a series in Los Angeles from June 13-15. They had chances to keep it going on Monday, but blew a lead in the seventh and then came up one hit shy in the ninth against a familiar face on the mound.

“We did have some chances, we just didn’t come through,” manager Dusty Baker said. “We had good chances a couple of times.”

None better than the last one.

The 38-year-old Isringhausen signed a minor league deal last season with the Reds, who gave him a chance to extend his comeback from reconstructive elbow surgery in 2009. After seven games, he came down with a sore elbow. The Reds decided that was it and suggested he look for another team.

“They just said I didn’t have enough in the tank,” Isringhausen said.

On Monday, he had just enough.

After the Mets traded closer Francisco Rodriguez to Milwaukee after the All-Star game, they’ve been using a mix-and-match approach in the ninth inning. Isringhausen is becoming the favorite choice.

An error by third baseman David Wright and Miguel Cairo’s two-out single in the ninth got the crowd on its feet. Isringhausen pitched carefully to Jay Bruce, walking him to load the bases. He then fanned Phillips on four pitches for his third save in six chances.

The Mets rallied for the lead against Mike Leake (8-6) and two relievers, scoring four times in the seventh. R.A. Dickey (5-8) allowed eight hits and a pair of runs in 6 2-3 innings, and the bullpen held on.

Both teams know their biggest problem lately — getting a hit with runners in scoring position. They had trouble with it again until the Mets finally broke through in the seventh.

Jose Reyes and Justin Turner had one-out singles off Leake, who left the game with a pitch count at 112. Carlos Beltran tied it with his fly out against left-hander Bill Bray. Wright singled home the tiebreaker off Logan Ondrusek, and Daniel Murphy and Jason Bay followed with RBI doubles.

“That’s how it goes,” said Ondrusek, who hadn’t allowed a run in his last 11 appearances. “Some nights, you throw well and they still get hits. Some nights, you’re bad and you still get outs. Tonight, I thought I threw some good pitches, but they found holes and spots where guys could keep on running.”

Phillips doubled home a run in the sixth, and Dickey left after giving up Drew Stubbs’ RBI single with two outs in the seventh. A bullpen that has struggled lately made it interesting and gave Reds fans a moment to reminisce.

After Dickey left, Pedro Beato walked Cairo to put runners on first and second. Collins then brought in left-hander Tim Byrdak to face Bruce in a sentimental matchup.

Bruce hit a first-pitch, game-ending homer off Byrdak last Sept. 28 for a 3-2 win over Houston that clinched the NL Central title. This time, Byrdak fanned him on three pitches.

Notes: Reyes has scored in each of his last seven games. … Reds 1B Joey Votto was out of the starting lineup for only the second time this season, getting a day of rest. Votto pinch hit in the eighth and flied out. He’s 2 for 18 in his last six games. … OF Chris Heisey got an MRI on his left shoulder that was negative. Heisey was sore after bumping the outfield wall while going for a fly ball on Sunday night.

The Associated Press WASHINGTON — After months of public nastiness and private negotiations, of court filings and rulings, of players... read more