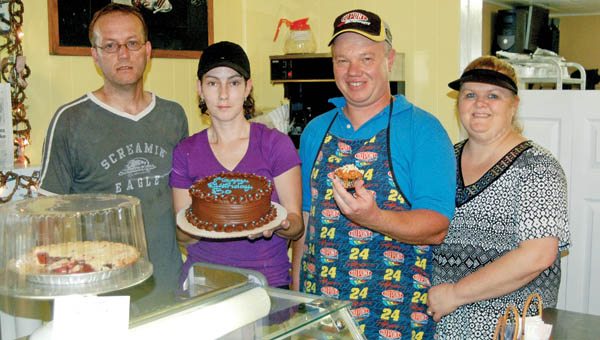 The owners of the Sugar Shak are, Mark Combs, Jessie Turner, Jerry Stewart and Tammy Stewart 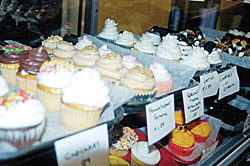 At one of Chesapeake’s newest businesses, a person can really indulge a sweet tooth.

The Sugar Shak opened recently on Third Avenue across from Monty’s Pizza.

“(Business) is doing great so far,” Tammy Stewart, one of the owners, said. “Everyone’s been very supportive. They’re excited that we’re here in Chesapeake.

“They’re excited that there’s a bakery close to home.”

Stewart, her husband Jerry, as well as her brother Mark Combs and his fiancé Jessie Turner jointly own the business.

One of its more unusual items is the pizza cupcake, which is one of Jerry Stewart’s creations.

He said he was playing around in the kitchen one day when he came up with the idea. More pizza than cake, the pizza cupcake is made of white cake with pizza sauce, pepperoni and cheese inside and the same on top.

So good in fact that a little girl recently came into the bakery and after trying it, decided to forgo a traditional birthday cake to have a whole pizza cake made for her party, Stewart said.

The bakery also sells sugar-free items, something that’s close to the owners’ hearts because Jerry Stewart is a diabetic.

Some of its best-selling cupcakes are peanut butter Reese’s, cookies and cream, red velvet and vanilla bean. Cannolis are popular, too, Stewart said.

The building where the business makes its home used to house Memorial Park Florist.

“It was ready to go,” Stewart said of the building. “The only thing we had to do was decorate.”

Stewart said she owes them thanks “for giving us the chance to bring something like this to the community. They’re really wonderful people.”

In a side room, the business owners have painted the floor in a pattern resembling the Candy Land game board. The room is currently empty, as the owners try to decide what to do with it. The original plans were to sell candy there.

“A lot of people are asking for hand-dipped ice cream so we may consider that,” Stewart said.