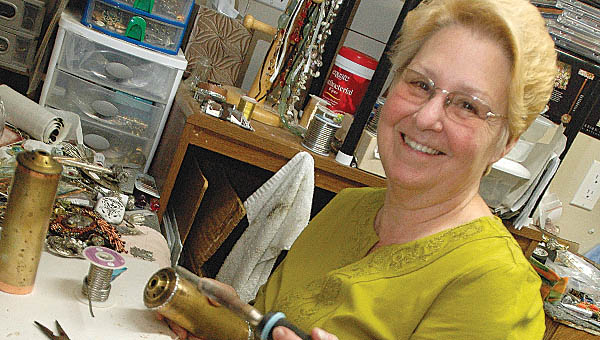 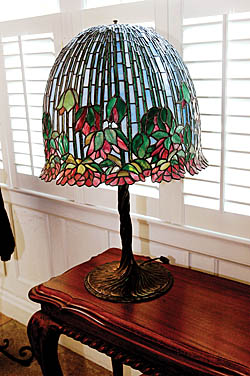 It looks as simple as tossing a glass marble up into the sunlight, then watching that sphere become a canvas of hypnotic, undulating bursts of magentas, forest greens and regal purples.

But watch stained glass artist Cathy Painter at work in her studio in Ashland, Ky. and the making of that old-fashioned child’s toy, the kaleidoscope, takes on the precision of a diamond cutter and the extravagant artistry of a Jackson Pollock.

The invention of Scottish scientist David Brewster in 1816, the kaleidoscope takes the principle of an optical illusion and marries it with pieces of tinted glass and mirrors to create a seemingly never-ending rotation of shapes and colors.

Take that lesson in physics and add the whimsy of Painter and you will get her one-of-a-kind pieces of kaleidoscopic art, many you can even wear around your neck.

“In my 20s, I took a class on stained glass,” the Southern California native said. “I was always fascinated and from there it just evolved.”

From those roots she began building Tiffany-esque stained glass windows and lampshades, from both authentic patterns and designs she creates herself.

“I love everything he did,” Painter said. “He was very intricate and I like intricate.”

To prove her point, she shows an inverted tulip-shaped Tiffany reproduction lamp made of 2,000 pieces of colored glass.

“I did that when my husband was in the Gulf War and I was in Germany,” Painter said.

Often she gets shade patterns from the California-based Odyssey Lamp System.

“When you do a Tiffany project, they reproduce everything,” she said. “They want you to do it the way he did it.”

Then when a customer asked about kaleidoscopes, she developed a mini-library on the subject, teaching herself how to build one.

Today Painter’s studio is crammed with the finds she brings home from her habitual trips to estate sales and antique shops. On workbenches are pieces of old silverware, the stem of a wine glass, beads, copper cylinders, even the rack from a 4-point buck. Pushed against a wall are sheets and sheets of stained glass.

“Nothing goes to waste,” she said. “I can walk into a store and a lot of what is junk to somebody else, I think about how to use it. I leave stuff lying around. I may not use it for a year, but I finally find a home for it.”

Throughout the rooms in her basement studio lie works-in-progress. A four-foot window with a mermaid theme rests on an old wooden door Painter has propped up for a workbench. A fiberglass form, lined in pale blue ink with the pattern for a lampshade, is dotted with a few pieces of glass.

“It’s like putting a puzzle together,” she said. “It just comes.”

And the seeming clutter proves a muse for the artist.

“I leave everything lying out,” Painter said. “I get inspired by the clutter of it. I love the challenge of creation, to make something no one else has.”

It was in California in the late 1980s that Painter met her husband, Russ, while he was on temporary duty with the Air Force. They married and moved to Fort Walton Beach, Fla., where she worked at a local stained glass studio, The Glas Haus. There she taught beginner and advanced classes as she delved deeper into the art form.

A couple of years later, she opened her own studio, “A Touch of Glass,” where she specialized in custom-designed windows, lamps and kaleidoscopes. In 1989 her husband was sent to Germany where Painter steeped herself in the European manner of working with stained glass.

In 1997, the Painters moved to Ashland after the retirement of her husband from the Air Force. Here she opened up her latest studio, Kaleidoscopes-N-More.

Today her work can be found at the gift shop in the Hilton Hotel and the Indigenous Art Gallery, both in Cincinnati, Gary Kouns Interiors and Aladdin Frame Shop, both in Ashland, the Damsel Fly shops in Midway, Ky., and the Galt House in Louisville, Ky.

“They find me,” she said. “I have people call me on the phone. Sometimes they see me at craft shows. This is a passion. I could never not do it.”

Interior designer urges personal style There may not be the question of how high a hem line should be when... read more