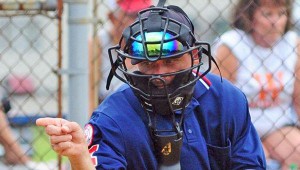 During his 10 years of umpiring at the little league level, Chad Pemberton has made a lot of calls. But it was the call he got that left him feeling like he had hit a grand slam.

Pemberton is one of 12 umpires who have been selected to work the Junior League Softball World Series Aug. 14-21 in Kirkland, WA.

Pemberton — the District 11 and Rock Hill Little League Umpire-In-Chief — took a call from regional director Mike Lake a few months ago. Lake works out of the main offices of the National Little League in Williamsport, Penn.

“When I first got the call, Mike Lake came up on the call I.D. and I thought, ‘Wow, what’s going on. What have I done wrong.’ He told me I had been recommended and I was thrilled to death,” said Pemberton.

Although he started umpiring games 10 years ago, Pemberton didn’t officially begin calling until three years ago. In order to qualify for World Series consideration, an umpire must work tournament games at the district, state and regional levels.

Pemberton has done all three in his short career including a regional game last year in Elyria.

“They look at evaluations from district and state and make selections from them,” said Pemberton. “Donny likes my style of umpiring and he likes me as a person. He made his recommendations through that. I appreciate all those who recommended me.”

Umpiring a World Series will be a lot different in many ways. Pemberton said he was looking at some of the possible teams that will participate and realized there are some barriers working games involving international competition.

“I saw teams from Latin America, the Philippines and Germany. I started looking at them and I thought there’s going to be different cultures. It’s going to be fun but it’s going to be educational as well,” said Pemberton.

Working a World Series is an honor in Pemberton’s eyes, but he said really it’s just the simple game of baseball and softball and it carries the same emotions that can be found at the local level.

Pemberton said he was watching the Cincinnati Reds 4-3 win over San Francisco on Friday night when Edgar Renteria got a base hit to win the game in the 13th inning and was mobbed by his Reds’ teammates.

“That’s what baseball is all about. It’s about the love of the game and your teammates and someone going above and beyond to make a play,” said Pemberton.

Pemberton will leave Aug. 12 and have an afternoon meeting the next afternoon. The trip and expenses during the week-long period are more than $1,200 and Pemberton has been seeking some donations to help ease the financial burden.

“I’ve had a few local businesses who have donated. I know a lot of businesses are strapped. I’m not looking for a lot. I’m very pleased with the response,” said Pemberton.

“They said the main thing for them is for me to have a good time. They’ve always responded well. I can’t thank them enough,” said Pemberton.

Pemberton works at Tracy Brammer Funeral Home and he said owner David Phillips has been very helpful toward making the trip.

“I work for a living like anyone else, so I’m thankful to David Phillips for allowing me the time off to enjoy the experience. It’s been a team effort from that standpoint as well,” said Pemberton.

CINCINNATI (AP) — The Cincinnati Reds scored five first-inning runs on their way to a 7-2 win over the San... read more