Not your ordinary café 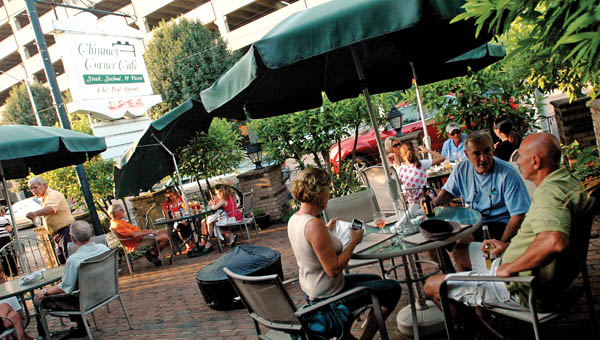 It’s a Tuesday afternoon and the crowd in the main dining room is giving a retiring co-worker an affectionate send-off. By the time the party is done, the dinner crowd will be coming through the doors.

The Chimney Corner Café at 1624 Carter Ave. in Ashland, Ky., is a busy place and that’s how its chef, Paul Runnels, likes it.

When he bought the restaurant 10 years ago, his goal was to give area residents a place to go that was a little different from the rest. A decade on, he has achieved it.

The makings of a chef

His interest in food eventually led him to the Culinary Institute of America in Hyde Park, N.Y. From there, Runnels honed his already considerable skills at some of the country’s largest hotel chains: Clarion, Hilton and the Ritz Carlton. And then in 1997 he came home to the Guyan Country Club. In 2001, he purchased The Chimney Corner Café.

Runnels brought with him some of the ideals he learned at those big hotel chains: using fresh foods and constantly freshening his menu with new items. And he brought with him the idea that dining out could be more than just putting food in one’s mouth.

Ashland Main Street Director Danny Craig said, while he appreciates all of the restaurants that call his city home, he recognizes The Chimney Corner Café occupies a niche of its own. For one thing, it has an easy atmosphere.

“It feels like ‘Cheers,’” he said. “It’s a place where people can get together and the food is awesome.”

And another thing: Runnels is involved in community events. Mainstreet and The Chimney Corner Café co-hosted a St. Patrick’s Day celebration. Each fall they co-host an Oktoberfest. Each month, the café hosts an singer’s and songwriters night as part of Mainstreet’s First Fridays.

While Runnels said he does not specialize in any one thing, there are standard items people favor such as lobster bisque and prime rib. Wednesday nights, CCC features gourmet burger and beer night.

“We have people who come in every Wednesday for burger and beer night,” Runnels said. “We have different beers from everywhere.”

Not just a frozen box

Runnels is quick to point out that while people may think of hospitals and factories as the area’s biggest employer, collectively, food service is much larger.

“You think about all the restaurants in this area and how many people they employ at each one of them,” he said. “Together they employ thousands of people.”

But, he lamented, local schools do not have culinary or food service programs to teach prospective workers at an early age even the basics. Runnels would love to see one here.

It would allow young people who may want to go into food service to get that early start, learning how to prepare food — not just to take something frozen out of a box and heat it up in an oven — but genuine food preparation.

“If someone came to me and said ‘we need an instructor’, I would jump on it.”

Chesapeake, Ohio teens hope to take music career to next level Sitting across the table from 4Mile members Abbey and... read more